So I don’t know where to start really so I’m just going to come out and say it. After several weeks of organisation, negotiation and discussion I find myself cheerfully back in gainful employment. My new job has almost intimidating potential and at the moment is a little large a concept to easily digest, but as of ten o’clock this morning I became once more an employee of the BBC – more specifically working in Radio & Music as part of a new live research and development team.

But it’s not just the job that’s fascinating – it’s also the environment. For the first time I’m actually going to be working in and around Broadcasting House, and (even though the whole area is being ripped asunder and rebuilt and even though I’m based in an extension to the main building) just being there feels like it connects me to a larger and messier tradition of people who have worked at the BBC in Broadcasting House over the last seventy years. From the origins of television through the Blitz right through until the present day, Broadcasting House has been a key element of the legacy of the BBC and there’s ludicrous amounts of history saturating every surface.

Last year I had a chance to visit the bomb shelters from the second world war – walls of concrete six/eight feet deep covered with faded remnants of sixty years of use and disuse. It was fascinating, atmospheric, almost haunting… The BBC Radio Theatre that was in the core of the oldest part of the building has been the scene for some of the countries greatest comedic performances – from the Goons and Round the Horne right through to (almost) the present day. When George Orwell was working for the BBC writing propoganda, he was based in Broadcasting House. There’s a Room 101 in the building, and it’s widely believed to have been the basis for the Room 101 in the novel 1984. Pretty much concurrently with his work, one of the so-called Cambridge Spies – the drunken, gay, apparently sybaritic Guy Burgess was also working in the building. That is, of course, when he wasn’t working for Russia… 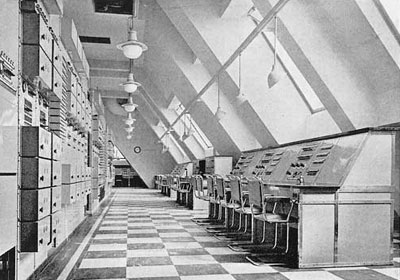 But it’s not just what happened inside the building that makes it vibrate with such potent historical energies. Even the sculptures on the front of the building (which are unfortunately covered up at the moment by scaffolding and screening) are significant. They were designed by Eric Gill – most familiar to graphic designers and typographers today because of his creation of Gill Sans. I heard a rumour from a friend of a friend once that the male statue originally had prominent genitals that were removed by a censorious establishment. I don’t know if it’s true or not, but it would fit with Gill’s aesthetic and with what I know about the political life of the nineteen-thirties.

There’s so much more that the building has been a silent witness to over the years. It’s coped with direct-hits from Nazi bombs, coped with generations of creative revolutionaries over eight decades and now is coping with a radical rebuilding to make it a home for the BBC for decades to come. It’s going to sound cheesy, but it’s a genuine honour to work there.