This was originally posted over on Medium and a copy of it was moved over here for consolidation purposes in May 2020.

Online last night I saw a bunch of people accusing the left of being bigots for protesting against racist and sexist rhetoric. The argument appears to be that the left are hypocrites for not respecting the freedom of expression of racist, sexist and discriminatory people to be racist, to be sexist, and to discriminate.

At its heart there is a tension here and it’s a tension as old as political theory —that all people should have as much freedom as possible but without compromising the freedom of others. But it’s a tension that we work out over time, in law and in practice. Fundamentally, most on the left have come to the conclusion that stopping people acting in racist, sexist or discriminatory ways results in far more good than harm — a feeling that those who experience sexist, discriminatory or racist abuse seem (for some reason) to feel even more strongly.

Anyway, I find the rhetoric on the alt-right about this stuff beyond offensive and awful — somehow equating threatening to take fundamental rights away from people with protesting about those rights being taken away. And I didn’t quite know how to express my frustration. And weirdly, the best I could come up with was a few short comic strips.

So here they are — five short strips which I think express the absurdity of the hypocrisy and contradiction in the alt-right position. Feel free to use them however you want (as long as you don’t edit the text in them). I’m releasing them under a Creative Commons Attribution-No Derivatives International License.

I was wandering down Oxford Street the other day when I stumbled upon this poster featuring Christina Aguilera attempting to flog Sketchers products to no doubt impressionable youth-type people. My first reaction was to think that the pose looked really familiar and after a fair amount of brain-searching, I’m thinking maybe it’s been ripped off from a piece by Tom of Finland. Now I’m really interested in finding the piece that inspired this advert – particularly because if it is Tom of Finland then there’s probably someone out there who should be writing a book on the way his bizarre sexualised gay imagery is being repurposed to sell shoes to a teen audience. 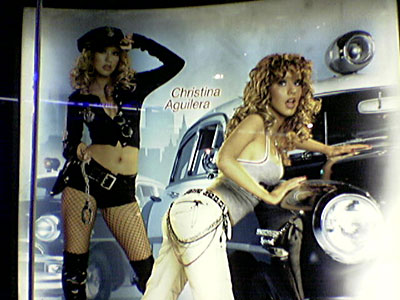 If anyone knows of the advert’s influences then please leave a comment below – and if you happen to have a URL for an ‘original’ somewhere on the web, that would be bloody awesome too.

Yesterday I received a piece of spam with a title so interesting and dramatic that I felt I had to illustrate it with Photoshop. Presenting: “Unrelenting Massive C*cks Destroy Innocent Pussies!” 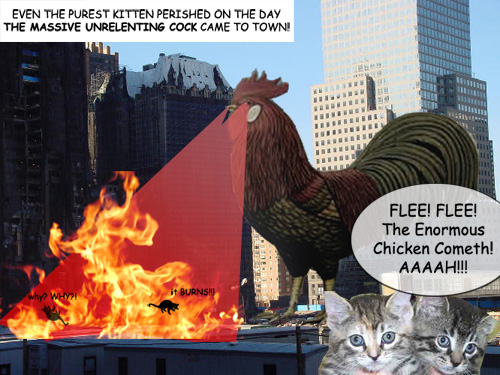 Addendum: Of course now my site will be blocked by my brother’s school for another six months. Sigh.

I couldn’t stop myself. God knows I tried. I spent ages tarting this up more, but in the end I cut all the fluff out of it and kept it to the basics – an image of a modern queen, remembering the bizarre horrors of a history of imperialism and really hard to get into frocks, with a little sex pistols shoved in for good measure. Country remember – fifty years of a sovereign, even a nominal one, isn’t necessarily an entirely good thing.