This part is mostly about: Illustrations of what an Apple Media Hub might look like and how it might function. If you have not done so already, you should first go and read Part One and Part Two which do not contain pictures anywhere near as pretty and are harder work to read.

What follows are illustrations of my basic concept here – a brushed metal, almost featureless box that sits underneath a television acting as wifi hub bringing internet access and local area network functionality into the home – and providing as a basic first feature set (1) the assisted capture of video from the TV or from CDs, (2) the watching of DVDs and (3) the remote-controlled play of media across multiple devices through local hubs. You can download the full diagram from here: Full Apple Media Hub Montage, or you can just peer menacingly at the details below: 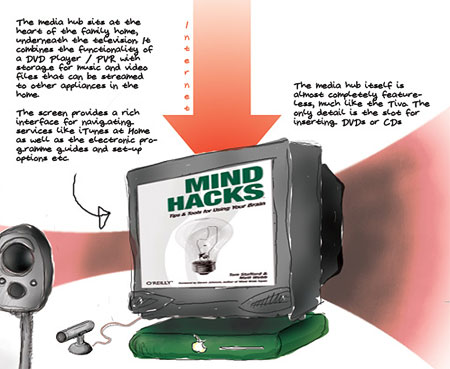 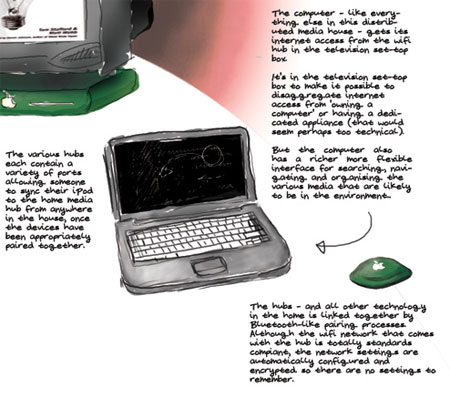 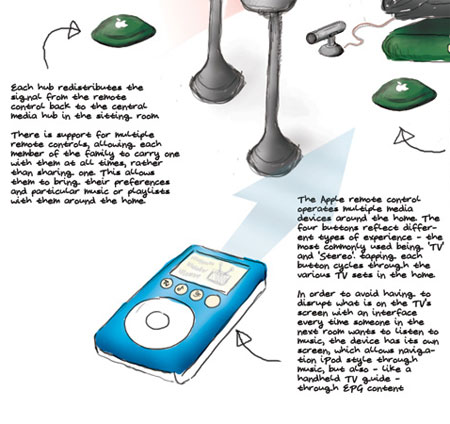 Well, unlike Dr Who, the last episode wasn’t a letdown.
Having worked with Sony, I agree with you that they’d never in a million years get anything this clear headed together. Their left front speaker doesn’t know what the right rear is doing, if you catch my drift. Their brand is well placed to do this, but their strategy is still stuck in the 80s.
You should start a sweepstake on how close Apple’s eventual design will be to this.

Tom Coates
has posted some really compelling pieces about what a media hub could look like in terms of functionality: A really rough proposal for an Apple Media Hub (Part One), (Part Two)(Illustrations)….

I don’t want to worry you, but there’s more to come…

But does it run Linux?

Well it would be an Apple product, so I’m guessing not.

Well your dreaming may have come at least partly true.