What follows is pretty much the archetypical weblog post. I mean it doesn’t have cats in it or anything, but it’s the next best thing. It’s like practically award-winningly archetypical. You want to give someone a lifetime achievement award for weblogging or something, then it would be for quality posts like this one, right? Right?

When I was a kid – and I mean something like seven or eight years old – I lived in a house in Norwich on a road called Sunningdale. My mother used to do a lot of her local shopping in a tiny little shop on Unthank road. I cannot remember its name. Anyway, my mother used to get me these biscuits – they were made by Bahlsen and were called ABC biscuits – and I used to love them. They were absolutely, undoubtedly my total favourite biscuits. It was my special treat to get a packet of these biscuits.

Anyway, one day they weren’t there any more. Just like that, they were gone. And after a few brief weeks of hoping they’d turn up again, my tiny child-brain got used to the idea that they weren’t coming back and somehow I managed to get on with my life. Every so often I’ve found myself in a shop with Bahlsen biscuits and I’ve had a bit of a scout around to see if they had them. But they didn’t. But hey – no biggie, right?

Recently, however, my family went on holiday and what should they find in some obscure shop is southern Spain, but packets upon packets of my favourite biscuits. And so they bought them. Six packets of them. And I tried them, and they were really nice. And now I’ve only got one packet left (pictured below). So here’s where you guys come in. I don’t want to sound like an addict, but does anyone know where I can get more of these gorgeous beautiful biscuits? I’ll send you cash money for them. If you know a shop in London where I can get them, I’ll be overwhelmed with good-will towards you. 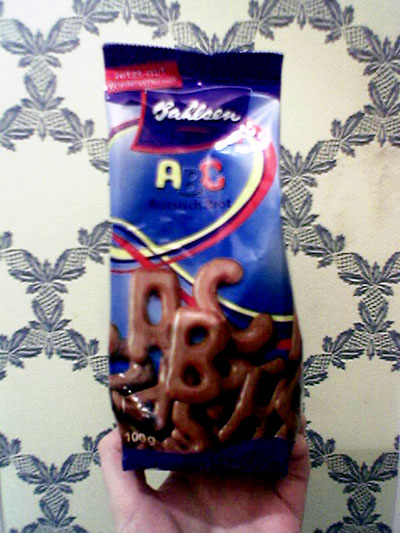 So there you are – a long post about biscuits in the tradition of English weblogging. But yet also somehow with a touch of self-aware poignancy, because these aren’t just biscuits. They’re also a part of my personal narrative – a piece of my living history rediscovered! Crunchy history! Chocolaty history! Mmm… History..!

10 replies on “A desperate plea for biscuits…”

There’s a deli on Regents Park Road (very near the Park) on Primrose Hill. They sell them. hx

I had exactly the same thing with some small nuts that I ate years ago, in Devon, except without the happy ending. These nuts were exactly like miniature coconuts, but were smaller than a walnut. I’m sure they started with a ‘coco…’ too, but despite a decade of scouring every nut stall I come across and searching the web, I have never seen them again. Which is a pity, because they really were rather nice.

You were lucky. I had to move to Amsterdam to get my hands on the delicious Stroopwaffels again.

i’d kill for a cola spangle

Hi, if you can tell me a supplier i would be most grateful. I am after Bahlsen Zoo biscuits? Having just got back of holiday from Fuerteventura my little boy of 7 months loved these biscuits and lived on them for the entire holiday. Having brought back 2 packets they have sadly gone. Most british supermarkets sell various Bahlsen biscuits but not Zoo animals.
Any ideas please?
Regards Andy

I have the same problem with hokey pokey ice cream. It is the best ice cream ever. But I’ve never managed to find any in the uk.

well, i live somewhere and this is where the Bahlsen fabrics are and where they make them. im in class with the son of Mr.Bahlsen, Andy. i am one of andy’s best friends and would be able to get you some…if so-post back if you want