Every day on the way to work my bus passes Selfridges. And from my elevated seat on the top floor, I get a pretty good view of the extraordinary themed displays that they put up each month. Sometimes they’re pretty rubbish. There was one about a month ago which had lots of ill-looking 70s-style mannequins posing uncomfortably against a snot green background. Around them were lots of fruit and vegetables. I think they were plastic. The whole thing made me feel a bit ill.

But for every failure, there’s a tremendous triumph. At the moment they’re running a Vegas-themed month in conjunction with some vile online gambling thing that I’m not prepared to link to. if you’re interested, they’re mention in the official website: Vegas Supernova.

The site is pretty well designed, but it really doesn’t convey the majesty of the thing. On top of the front awning is a huge neon sign that almost overwhelms the whole building, screaming Vegas Supernova into the night. It completely swallows any of the Selfridges branding, and sits surprisingly comfortably with the neo-classical architecture and the Art Nouveau sculpture. If you’re having trouble visualising it, try thinking of Biff Tannen’s Pleasure Palace from Back to the Future Part II. Yes, you’re getting it now. It’s that wonderful. I’m going to be so disappointed when they have to remove it.

Anyway, the best imagery is in the shop windows at the front of the store. They could have gone in a number of directions with this stuff – Vegas isn’t the hardest place to evoke. But rather than just push tackiness or spectacle, they’ve brought in David LaChapelle. His work is extraordinary, it’s almost as if Vegas itself is self-representing what it thinks is most important about itself – using only the plastics and artificiality and neon that it has naturally at its disposal. It’s almost an innocent portrayal of the place, as if the city doesn’t know that it’s kind of tacky and just wants you to like it.

My favourite example of this stuff is the representation of the city’s sexuality – where the brazen display of breasts that Vegas is known for is abstracted and repackaged in plastic as windows full of inflatable breasts. Every so often they deflate a bit and then reinflate, pressing massive artificial nipples agains the glass. It sounds pornographic, but they’re made of such artificial and bright material that they look a bit like children’s toys. It feels like the city itself is going, “look at all my toys”. 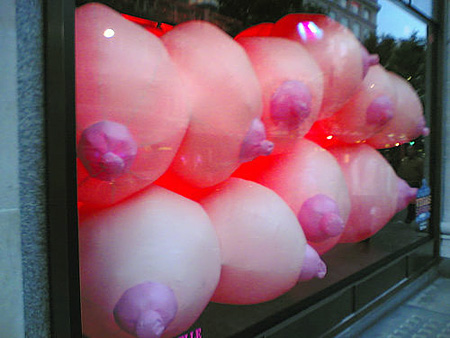 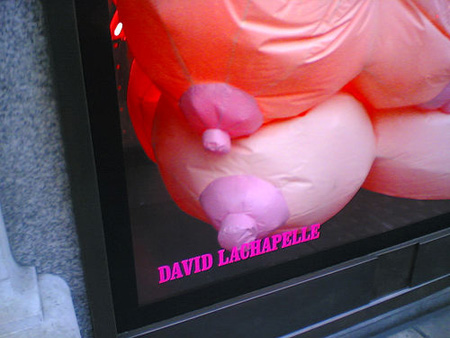 Anyway, I can thoroughly recommend the whole experience, but if you want to see the spectacle for yourself, you’ll have to get down to Selfridges today or tomorrow before they start taking it all down. And if you’ve seen it already, why not let me know what you though about the whole thing by posting a comment below?

[These images are courtesy of Rebekah Ford, who managed to get much better photos of the orbs than I did. You can see more on her Flickr photostream. I feel I should also share one of her insights on the whole spectacle – that the inflatable breasts looked like they were about to burst through the glass in their thousands and start bouncing down the streets Prisoner-style. It’s an image I’ll take with me to my grave.]

10 replies on “On David LaChapelle, Selfridges and a Vegas Supernova…”

When I was in london a few weeks ago, I was completely oblivious to the fact that it was selfridges that I was walking past (I was slightly lost at the time) and just assumed that it was a string of sex shops.

Have you ever actually been to Las Vegas? Seems like London is so far away from Vegas that it can only parody the Vegas of 10 / 20 years ago…

Actually yes I have been to Las Vegas, but to be honest it was around twelve years ago, so you may have a point. I should point out that the Londoner who was parodying Las Vegas, though, was actually born in Connecticut in 1969 and remains a well-known American photographer and video director. So it’s not entirely our fault…

i did actually say that they would escape and keep growing and growing and then expand larger than the earth and then get too close to the sun and then explode and cover the earth with a thick layer of burnt thick molten pink plastic which would block out sunlight and we would all die of sun deprivation… take that to your grave coates!!!!

I walked past this only yesterday, and, seeing how great the window displays were, thought that there must have been something cool going on inside. But all you get inside is a few hanging neon signs and the odd gambit machine dotted about the same old perfume stands. Disappointing.

re: disappointing
Well thatís advertising for you. Lots of brilliant artistry, pomp, and circumstance…all for the same old crap.

Downstairs is pretty fun … a wedding chappel, a “casino” room with showgirls and craps tables. The Nicolas Cage wax figure was perhaps unnecessary. Like Vegas, it’s all good silly fun.

please when that pistures was taken ?

This report was a big help for my dissertation on shop window advertising, so I just wanted to say a big thankyou for making it available!
Ta!!!

Coo! only just found this, the company that made the breasts (and the other inflatables) was Location Inflation. I designed and built the inflation system for them and also built the huge straw snorting cocaine window (although I didn’t do the neon. Glad you liked it ! One of the more sureal jobs I’ve done.