Last night – thanks to the intervention of my good friend Katy Lindemann – I was lucky enough to see a media screening of Batman Begins. I used to go to media screenings of things quite a lot when I was writing film reviews for the BBC and working at Time Out, but it’s been a while and I’d forgotten quite how lovely they are. The screens are always a good size, the film is never covered in scratches and you get little nibbly bits beforehand (mmm houmous). But most importantly, the seats are astonishingly comfortable. Sometimes you’re particularly lucky and you get dedicated armchairs to sit in. I wasn’t quite that lucky this time, but they were still more than ample – clearly designed for super-rich, super-powerful and amply-buttocked executives like Harvey Weinstein. I have this image of escalating arms races in screening room technology to persuade ever higher-powered people to think kindly on your production – “And this one is built as a floatation and isolation tank complete with martini tube and foot massager”…

Cough. Well that’s enough about the food and the seats, I suppose. So here’s the surprising bit. The film itself was bloody good fun. It’s a film that plays more to the motivations and personal development of the man who comes to wear the bat suit and it’s all the better for it – this is absolutely not a film made by people who fundamentally believe that comic books are fundamentally laughable. This is a film by people who respect the source material, who are prepared to engage with the fundamentals of the enterprise – strip it all back down to the essence of the story and rebuild again from scratch. This is a Batman movie with genuinely scary bits: a Scarecrow who actually freaks you out, savage fighting in prisons, crazed killers on the streets and a major villain who is so focused and clear that he seems more like a religious fundamentalist than a cape-wearing weirdo. The script and actors really hold up to scrutiny as well: Bale is solid (even if his accent isn’t), Katie Holmes plays a bit of a whiny cow, but at least she’s a tough, smart, idealistic whiny cow (which is a step up from being a generic off the shelf swooning dame, I guess), Gary Oldman’s Gordon is believable and Ra’s Al Ghul pretty much rocks. And in the background, Michael Caine and Morgan Freeman steal every scene they’re in.

The only problem with the whole film for me (other than the microwave whatsit, which I’m pretty sure would cook all the people nearby) is the standard problem with superhero films – Batman still looks pretty dumb in the batsuit. Thankfully they’ve figured out that you keep Batman scary by respecting his methods – it’s designed to be scary in the dark – so (for the most part) that’s where they keep him. And certainly, the minor quibble is far from enough to stop me recommending that you all go and see it immediately.

Oh and there’s something else and it’s pretty damn awesome. Last year I sneaked into the ruins of the great St Pancras train station with a few other Map Club types like Rod, Phil, Webb and Hill. Inside the epic pseudo-gothic structure were some beautifully over-the-top features from its time as a hotel at the beginning of the century. Particularly impressive was the great staircase that runs up the wall on the British Library side of the building, up to a fully restored deep blue-green and gold hall at the top of the building: 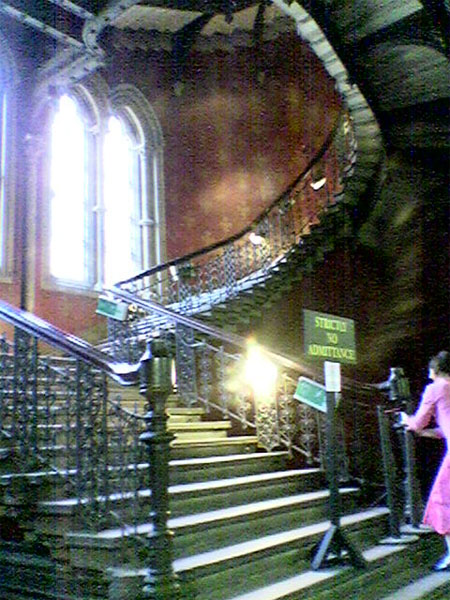 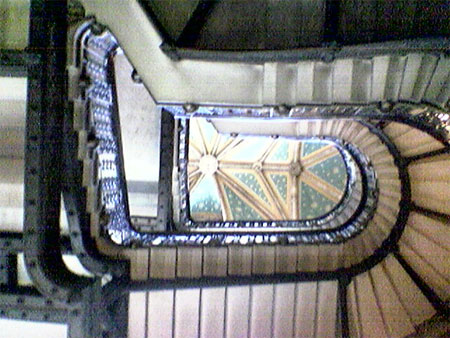 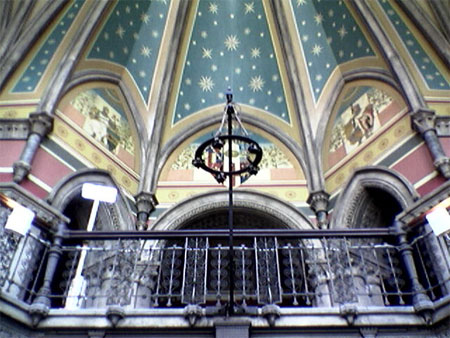 Now imagine that space full of conflict and battle, filled with shadows and with the lunatic flurrying of ten thousand bats and SWAT teams and with Batman – arms outstretched – launching himself down from the top floor through the shaft of the staircase to land like a god in the middle of some vision of hell. Imagine that all happening around that ornate gothic staircase. Well, I don’t have to imagine. I’ve seen it! And it’s one hell of a moment, on one hell of a location shoot in the heart of London. Bloody brilliant.

8 replies on “On 'Batman Begins' and St. Pancras Station…”

“Sneaked”? “Ruins”? Firstly, I thought that they did tours, which you paid money for. Secondly, it’s not been in use for a while, but when I visited four years ago it was hardly “the remains of something destroyed”. Some of the plaster was peeling a bit, but the roof hadn’t fallen in, and there weren’t giant puddles all over the place.

Still, artistic licence aside, it does sound like a good use of the space. Better than the Spice Girls Wannabe video, anyway.

I’ve been to some media screenings here in Dublin, but they don’t use private cinemas for them (well Buena Vista does, they have their own, but it’s just a barely-refurbished flea-pit with VERY uncomfortable seats).
And they never serve us food. Unless I’ve been going to the wrong ones.

Paul – yeah – basically I was using a bit of dramatic license there. Although if you look at the Flickr photogroup in question, there are certainly some ruined bits and some unsafe bits.

I loved Batman too! Pretty interesting that they would use that building from London since I thought most of the movie (or maybe just the overall architecture/layout of Gotham with CGI additions?) was shot in Chicago.

I’m glad someone had a good experience watching BB. When I saw it last night I had to endure the great guzzler behind me, assorted chatting and someone a seat away from me, actually rolling her own cigarettes all the way through the last ten minutes . It’s incredibly difficult to pay attention when you can see someone’s tongue flying back and forth out of the corner of your eye and hear the crackle of backie paper.

Did you see any of Senate House? I saw them filming there – be interested to see if it made it in to the final cut. Guess I’d better go and see it myself …

I’d completely forgotten about that to be honest. Probably if I looked more intensely at it I’d be able to recognise it, but certainly it didn’t leap out at me when I watched it – unlike the St Pancras stuff which so entirely did.

I stumbled upon your blog while searching images on Google for what is locally known as the “Batman Building” in Nashville, TN, USA. It is quite an unusual and striking piece of architecture and I thought some of your readers might be interested in taking a look.