So I fly back from San Francisco today at the end of the weirdest holiday I’ve ever had in my life. I keep forgetting how many people I know out here. So enormous thanks to Leslie, Ben and Mena for housing me for a few days. Thanks to Nat Torkington, Cal Henderson, Ryan Carson, Kevin Werbach and Trevor F Smith for hooking me up with the nerds. Thanks to Heather, Lance for wandering around with me. And general waves to Jesse James Garrett, Jeff Veen, Dave Sifry, Ev Williams, Derek Powazek, Stewart Butterfield, John Poisson, Molly Wright Steenson, Ross Mayfield, Suw Charman, Kevin Marks, Leonard Lin, Anil Dash, Brad Fitzpatrick and all the other bloody millions of neat people I got to hang out with while I was out there. Mostly, I feel like I didn’t get anywhere near enough time to chat to you all – I’m particularly regretting the end of conversations with Jesse, Derek and Dave.

Anyway, on the flight back I’m hoping to catch up with the note-taking and the synthesis of all the stuff I’ve been up to, but probably the defining memory of the trip for me was getting to go to PARC. It’s a place I’ve read about so much and so many times and it was extraordinary to see it – however briefly – in person. So here’s my representative picture of the whole experience (you can see more on my Flickr photostream). 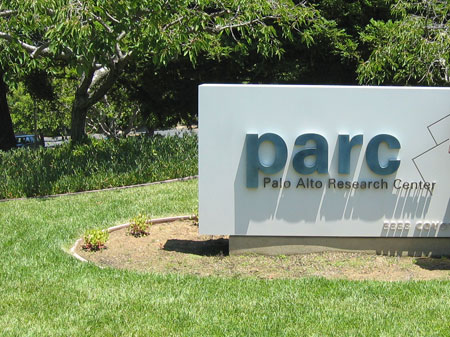