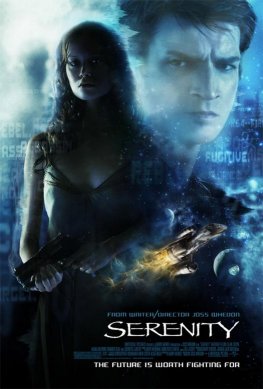 Last night – eight hours after landing back in the UK – I went to see a very special movie. In fact I went to see a very special preview of a very special movie. I went to see Serenity. And if you like adventure films, character-driven drama, sci-fi or just have any desire to watch something intelligent, exciting and funny, then I thoroughly recommend that you watch it too. It’s as good a film as the Lord of the Rings films at their best. All the recent Star Wars movies put together aren’t fit to clean its boots. I can’t think of a sci-fi film in my recent memory that can touch it, frankly. It’s out in a month. You will go and see this movie

Now I have to be honest with you, I – like many many other people – was a fan before I got in the room – although my love for the show was far from immediate. I’d loved some of Joss Whedon’s earlier stuff on Buffy and Angel – smart shows with vivid characters that burst out of the genre fiction ghetto – but the premise of Firefly hadn’t really immediately grabbed my attention. In the end I won the DVD in some ludicrous competition and after ignoring it for a few weeks, I started to watch the show that had been cancelled before the end even of its first season.

DVD Disc One was pretty good, but it took until the end of the second disc for me to start realising that I was loving every minute of it, and from there I just started devouring episode after episode. And it started getting more and more entertaining until suddenly… Nothing. The end. Cut down in its pride. I bought the DVD for a few friends, and watched them fall in love the same way I had. And then we heard about the film…

So the story goes a bit like this – 20th Century Fox cut the show down before it was finished. No one was watching it. Who can blame them. But the DVD sales – fueled by word of mouth and an almost insane love of the show from its fans – were enormous. Based on this and the strength of the premise and characters, Universal decided to fund a film. This never happens. This is really really strange.

And what’s the film like? It’s big and its funny and it scary and it’s unafraid to talk about big stuff. I do not think that having seen the TV series is necessary to enjoying this film, but I can’t say for certain. The set-up is strong and introduces as many of the large group of character as you could possibly expect. There’s enough here to carry anyone into the universe and to care about what happens to the people in it. It’s an action-adventure but it’s not plotless or trivial, and so it’s possible that fresh audiences dealing with multiple backstories might find it a little confusing the first time through. But even if they are, I think they’ll get enough from it to want to see it again. It is a very. good. film.

And if you have watched the show – you’re in for a treat. There is nothing here for a fan to quibble about, and their added familiarity with the characters and investment in their lives will make the whole experience that much sweeter, more painful and more engaging. I totally agree with Londonist on pretty much all of that stuff. And what happens? I can’t spoil it for people – except to say that the battles are huge, the characters true and you could not expect such a battle to be fought without cost.

And you’ll get your ending if that’s all you want. You’ll be happy. Those fans who felt the show was left to die in its infancy will see it get the send-off it deserves. But I want more. After the screening, Joss Whedon himself and Summer Glau participated in a little Q&A session. Joss is funny in person. He’s personable and pleasant and a bit geeky. He’s put his heart and soul into this movie and it shows. He took a considerable amount of time to answer people’s questions and talked about an enormous range of subjects. He clearly wants to get the fans motivated and out in the world proselytising.

And for once, I don’t begrudge it. For once, I’m not suspicious. I don’t feel manipulated by marketeers. This film is worth celebrating. It’s worth shouting about. It deserves a sequel. If ever a fan favourite deserved to succeed its this one, and it deserves to succeed now, not on DVD in decades to come. So stir up the family, get your friends to watch the series and realise what they’ve been missing, and get yourself down to the cinema with about a dozen other people when this film is released. The word is out. You won’t regret it. This film is shit-hot. And if you don’t believe me, then check out its IMDB Rating of 9.1 from 1358 users. It’s a classic in the making…

And what’s really funny is that this is exactly the opposite of how Buffy went, from Movie -> TV!

I can’t wait for the movie to come out. I didn’t get the DVD set until I heard they were making a movie from it. I agree it was probably by the end of disk two that I found myself really caring about the characters and what was happening to them.
I think with the age of DVD more things like this may happen. Just look at what happened with the TV show “The Family Guy”. It was cancled then after the DVD sales went through the roof, they decided to bring it back.

Damn, how did you get to see it? I’ve been bugging Universal for ages for a preview screening. Like you, I fell in love with Firefly by accident.
If you’ve never seen it, go and buy the DVD box set. You won’t regret it.
I’m delighted that the feedback on the film is good. But if you’ve seen it for free, go and see it when it comes out. Good box office for Serenity and there could be another one!

Are you in Edinburgh, Tom?

Nope – there was a screening in London as well, and I think Manchester and one other place. I went to the London screening. And it rocked.

Hey Tom – glad to see we are on the same page with this one 🙂
Joss mentioned a few things still left untold…
Fingers crossed that they get a trilogy out of this.

I’m in two minds about this – I’ve read a lot of pontificating about this and always ALWAYS there is mention of the pontificators love of Buffy/Angel etc etc.
The premise of the movie and general buzz makes me think I’d like it and I’m certain I’ll watch it but… well there’s that “fanboy” nag at the back of my head.
Benefit of doubt is on hold for time being methinks.

Well, that’s a perfectly reasonable concern – if you’re concerned about my judgement, then maybe reading some of my professional film reviews would help you get a sense of whether you would on the whole agree with my opinions?

I don’t think the film will just appeal to fans — I was at the world premiere with my uninitiated boyfriend (who hates Buffy, and had never heard of Firefly or Angel), and despite the fact that the only information i gave him was “cowboys in space,” he really really liked it. He said it wasn’t a masterpiece, but a great action/comedy and “better than most of the stuff you see these days.” I’m just hoping people will give it a chance so they can be pleasantly surprised.

And if you’ve seen the DVDs, and are wallowing in the wait before the movie, watch the mysterious R. Tam Sessions in the meantime.
(Yes, that’s Summer. Yes, that’s Joss.)

Serenity is the most exciting, well written, well casted movie I have seen in a very long time. From the second it starts up, the movie pulls you in. The characters are dynamic and solid. The graphics are simply amazing. The cast was WELL picked! Fox or Sci-Fi would be fools to let this clear winner escape them in terms of either a Movie Part 2 or a series that should come out of this. Well done. BRAVO! FINALLY something with heart and soul that is new and incredibly fast, full of heart pounding energy and quite funny at times. WOW! Well done! WELL DONE! Not only will I highly recommend this to everyone I talk to. I will see it again and I will buy the DVD !!! This is a movie that just sucks you in and you want to see it. You want to know more. Serenity is Amazing!

Serenity sucks… It’s such a bad movie! Please, rent something else my friends!