So the whole FooCamp experience has ended, and frankly it’s been pretty astonishing. It comprised roughly a hundred and forty potential talks to go to across ten rooms, assembled in an ad hoc fashion on the Friday night. Some of the talks were amazing because of who was there, some of them were amazing because of what they were about, some of them were frankly so far beyond my expertise that I smiled and nodded at the right points hoping that I wouldn’t get found out and asked to leave. Even the stuff that was in itself not terribly interesting became interesting because of the people who were present and who were able to take up the baton and run with it in new directions.

It’s absolutely clear to me that the whole reason for the event is the people and therefore the opportunities for creative collision and friction. As such, it has a tremendously collegiate non-competitive feel to it, with everyone believing that the best way to make great things and change the world is to share ideas and learn from each other. As Danah has said, it’s incredibly depressing and conflicting that this kind of event just doesn’t scale well enough to let in all the people who should be there. I’m more than aware that there are hundreds of people in the world who would have had more to contribute to this event than I, and I was surprised to be invited and was humbled by the stature of many of the other participants. I think Danah kind of hints at something interesting when she talks about the parallel BarCamp, and about the nature of competition and alternatives. Perhaps a competitive market in collaborative events could be a way to achieve fairness – or maybe that makes the divides wider. Maybe it’s impractical to think about collapsing heirarchies, and we should instead be proliferating them wildly – cut in all kinds of different directions, removing a sense of one embedded power structure and replacing it with hundreds of parallel, orthogonal ones. I don’t know – scarcity of time, attention and resource have always been problems and we all have a responsibility to try and work out ways to alleviate them. In the meantime, all I can say is that FooCamp was a hell of an experience, and one that I’d delighted to have been able to attend.

My favourite sessions were on BitTorrent and the future of media (Bram Cohen), Technologies of Co-operation (Howard Rheingold) and on the nature of Web 2.0 (Tim O’Reilly) but it was definitely the stuff that went on outside the sessions that really blew my head off. The conversations I had with the guys from Odeo and with Doug Kaye from IT Conversations were wonderfully engaging and useful. And I think I can see some really interesting opportunities for collaboration after long involving and exciting conversations with Jimmy Wales. More on that another time, when we’re a little further down the line with it. It was also great to see Dan Gilmore again, and to now be in a position to think about how I might be able to get something going between him and the BBC. It was also great to finally meet Andy Baio – with whom it seems I have something new in common – and to get more time to go to Taco Bell with Josh Schachter! Everyone gets Tacos! Everyone’s happy!

And the games! And the toys! A couple of years ago I noticed on Barbelith that people had started playing a game known as Warewulf or The Mafia Game. Here’s the begining of one of my favourite instances of the game in action on the board: Mafia 2: The Early Years. I enjoyed the spectacle so much that I even persuaded Cal to start working it up into an online game based around messageboards. The Barbelites even played on the new system a couple of times to test it. Eventually, we ran out of time on other projects and it got shelved. But nonetheless, I’ve always had a bit of a fascination with the game – even though I’ve never had the opportunity to play it live.

Well all that changed this weekend, with up to thirty of the most impressive people I’ve ever met staying up until four or five AM to play Warewulf with each other. It was tremendously good fun with HB Siegel, Chris DiBona, Jane McGonigal and Don MacAskill shining particularly brightly. It would have been even more enjoyable if they hadn’t decided so often that the game was really called “Kill the Brit”.

And the Segways – well what can I say. I mean, I’m a Londoner – I’m not sure I’ve ever even seen a Segway in the flesh until this weekend, let alone played with one. But they could barely get me off them, as this photo (taken by the redoubtable Dave Sifry) should illustrate: 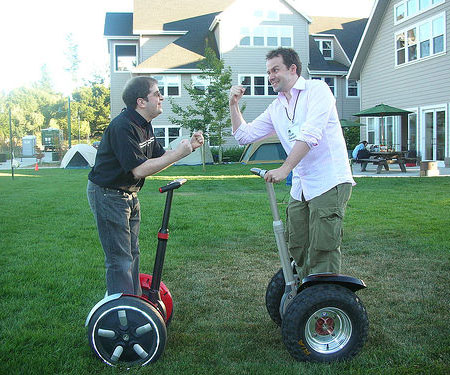 Anyway, that’s enough from me for the moment. I’ve got lots of things I want to write up and talk about over the next couple of weeks, but for now I have too many meetings to go to and things to chase. So for now, that’s your lot.

3 replies on “In which Foo blows my head clean off…”

I find it a bit rich that Bram Cohen is doing sessions on the future of media, when at SxSW he was going with the whole ‘Awww, I’m just a coder, y’know’ line when directly asked about his invention’s disruptive effect on the media business. What did he have to say for himself?

Not just any old Segway, but a pimped out (as the kids say) off-road Segway!
I saw someone on a Segway on Clerkenwell Road a few weeks back. Sadly, his Segway was not pimped out, not was it of the off-road variety.

thx for a nice description,
glad u’ve enjoyed my game!