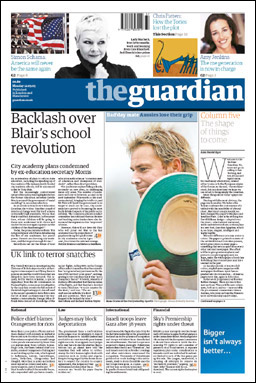 So the big typographic / design story of the moment should be the redesign and resizing of The Guardian. But, I have to be honest, most of the design sites I normally visit don’t seem to be talking about it at all. The first newly-designed issue comes out tomorrow, and the last redesign was one of the most controversial and revolutionary of the last fifty years. You can see a version of the cover and a set of features about the redesign over on the Guardian’s site. I’m particularly excited about this after going to see an exhibition on Newspaper design a year ago (see the Flickr set) with Matt Webb, Phil Gyford and the rest of Map Club. After a few presentations, a discussion started about the Guardian’s move to the Berliner format. A year later, we’ll get to see what it actually looks like.

From the digital images I’ve seen so far, though, my initial impressions are mixed. I’m quite excited about the size and format changes and the typography sounds fascinating. I’m not completely convinced by the all lower-case logo though – it seems to me to be a bit sexygirl153 and not really serious enough. A friend reliably informs me that in the whole sub-dom culture, submissives often write their names entirely in lower-case. She suggested that perhaps this gave the wrong impression to a paper that aims to be authoritative. I think she might have a point, and fear that the branding might play right into the hands of people who think it’s a woolly liberal publication for spineless school-teachers. But then I haven’t seen it close-up yet.

One thing I think might compensate for that image is the new advert they’re running, which really pushes the whole dynamic change idea as well as the size shift and the increase in the use of colour. It’s a great little advert and might push the publication out to a whole range of new potential readers.

8 replies on “Looking forward to the new Guardian…”

You can access the digital version for free… until Sept 26. Nice.

I’m looking forward to the new-look Grauniad as well. I’m very fond of their current design (I’m pretty sure I can remember them adopting it, which is really odd because I would have been 7 at the time) but the new shape will be handy for train journeys, which is the only time I usually read the dead tree version.
I enjoyed their weblog today, and the video interviews are worth a gander as well.

thanks for the mention 😉

I’m a bit confused as to how you can be so worried about a lower case g giving over a non-serious image and yet praise an advert that could have easily have been for a relaunch of Woman’s Own but with a sports page. Serious and authoritative weren’t the adjectives I would have used do describe that advert.

Tom, while I’m not sure my reservations about the lower-case logo exactly match yours, I do worry about the loss of the capital “G” which goes so well with the definite article to give an air of authority to the paper. I just wonder if this fits in with “The Guardian” style guide (and yes, do I refer to “theguardian” now or what?)…? On the postive side, however, there has been a great deal of interesting coverage in the press (“Evening Standard” and “The Sunday Times” for instance) and the explanatory insert on Saturday did a good job of not talking down to readers, and setting the redesign in a context of both good design and competition.

Mark: No, you don’t need to refer to The Guardian as theguardian just because its logo has the two words combined. Nor do you need to pronounce the ‘the’ in the logo in a light shade of blue. Hope this clears things up!

Does anyone know if theguardianweekly is going to follow suit?
[I first met T(t)he ()G(g)uardian thru the weekly in Australia in the 70s. It was published on this beautiful thin onionskin airmail paper, and it made me aware how lovely a thing (i) a weekly was on (ii) good paper.
It was also the first time I read cricket journalism worthy of the game… And, let me say, on this day, that it’s good for cricket, good for the Ashes, and good for the next tour of the Poms in Australia, that you won the bloody thing at last].
I’m not sure if regular Guardian readers are aware of the reach of the paper through the weekly; but now I’m in the states, I would chuck another subscription at it if it upgrades…

Does anyone know the song that’s used on the advert?