Television is such a strange enterprise! I don’t really know how else to put it. I get an e-mail in the afternoon from Tim Levell at Sky News saying that they’re looking for someone vaguely clued-up to talk about weblogs that evening. I ask a few questions and get a bit nervous, and chat to a couple of friends and then decide that sure – even though I’m scared to death by the whole idea of live television, it’s not exactly an opportunity you get every day. So I have a shower, find a shirt that doesn’t look too bad, and scrabble around for a sweater that isn’t still damp from the wash and wait patiently for the doorbell to ring.

They’re sending a cab to collect me, which is great but still a bit weird – the journey to the studio will be about forty-five minutes, with one dedicated guy organised to drive me both to and back from somewhere west of Hammersmith. I find it difficult to believe that anything anyone could say on weblogs in three minutes would be worth however much an hour and a half taxi ride must cost, but then after two years at the BBC I find many things that go on in the world of business extravagant in the extreme. I flew Premium Economy the other day! Can you even imagine! Anyway, the drive is long and makes me sleepy and I’m stuck reading some random magazine with a big feature on Bruce Springsteen and trying to make polite conversation with the driver and desperately trying not to feel like I’m somehow an exploitative √ºber-capitalist exploiting the common man.

Sky News appears to be located in a rather depressing industrial park near a motorway, and at first impressions, the whole place is much less intimidating than I’ve been expecting. It’s a completely different kind of environment to the BBC’s news rooms for a start. Stage one is to get into the building – all you can really say is, “Er, hi! I’m coming to … er … be on the news, I guess!” They don’t bat an eyelid of course. And then – having been collected – it’s a ten-second walk directly past the studio and into make-up – the kind of walk you’d take from your front door to your kitchen. It’s that close.

The woman in make-up looks me over and asks if ‘that’s’ what I’m going to be wearing on TV, which was nice. Then I’m sat down and she starts to brush me with a variety of orange shades. “What are you going to be talking about?”, she asks. “I’m going to be talking about weblogs,” I reply. “Oh, really,” she smiles, “You have to ask sometimes, does anybody really care!?” Potentially too difficult a question to answer, I demur and we talk about where I work instead. 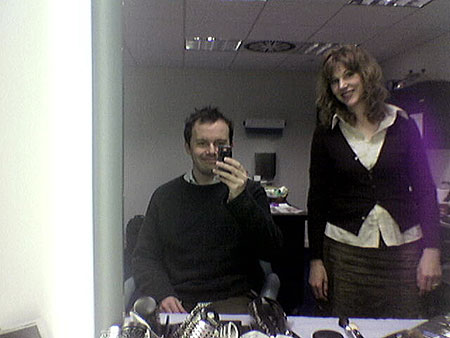 And then after a few seconds in an actual green room devouring biscuits, I’m out on the floor talking to the newsreader Jeremy Thompson. While the previous video feature was on he chatted to me, calming me down a bit, showing me how things worked and talking about a few of the weblogs that I’d recommended beforehand, and then I watched as he did a feature about icons of Britishness (featuring Photoshop mock-ups of the Queen). And then suddenly I’m on and he’s asking me questions and I’m stumbling a bit with my language and hopefully not looking like too much of an idiot. And then – as soon as it’s begun – it’s over! And I walk out talking to Tim again, and within a few minutes I’m full of adrenalin and back in a cab heading for Central London.

Unfortunately, I have no idea whatsoever what I was like – as my Tivo refused to record the right channel. My father said that I looked okay and that he couldn’t tell whether it was the make-up or not, but it looked like I’d shaved, which was good. Unless anyone out there happens to have access to a ripped stream of the whole debacle, the best I’ve got is a couple of photos taken by some lovely friends and posted on Flickr for people to mock: 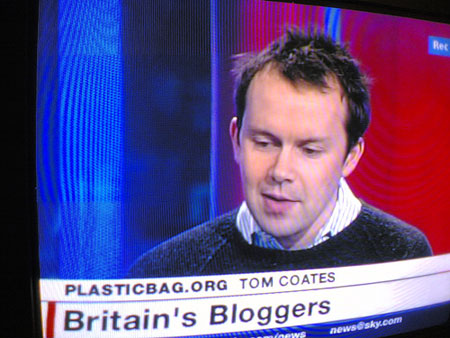 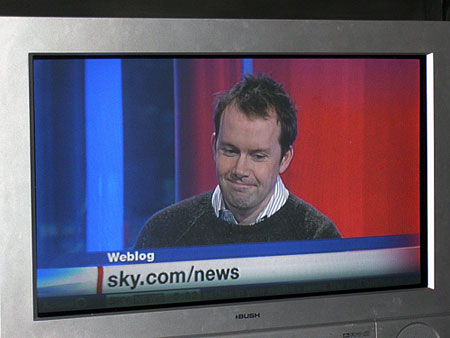 Well anyway, there were some lovely comments on my post yesterday, so thanks for the support guys (but I don’t trust you lot either)! Anyway, there’s more detail from the other perspective over on Jeremy Thompson’s weblog (which I have now confirmed is actualy written by him), which contains some of the weblogs I recommended that might like to mention on air. I think I specifically mentioned Random Acts of Reality, Dooce and Green Fairy on air – although to be honest the whole thing’s a bit fuzzy in my head.

14 replies on “On being on television…”

You mentioned little old me?
Cheers – I owe you a pint.

Can’t. Believe. I. Missed. This.
Also, I *love* Jeremy Thompson (he’s the only Sky News person that sticks in my head). Had no idea he had his own site… although, like the Sky News website, it’s ugly as hell.

He was actually really nice, supportive and helpful. Kept control of the conversation without pushing me around. Got me into the right headspace. Very very cool.

I have it recorded on my Sky+. I’ll get you a copy of it.

I could not believe you were on TV, I’ve been a reader of your blog for 2 months only and it striked me as those tricks the universe plays with us every once in a while. Anyway, it was a fantastic interview. Hope you’ll get more extravaganzas of this kind.

if ‘that’s’ what I’m going to be wearing on TV
I’m with her. You went on TV representing an entire nation of weblogs wearing your pyjamas?

Did you demur or were you demure?
God, will you get yourself on TV over here in the colonies already? I haven‚Äôt done my squealing ‚ÄúIsn‚Äôt he adorable?!‚Äù fanboy bit in like half a year.

“You went on TV representing an entire nation of weblogs wearing your pyjamas?”
Yes. Surely, he must own one of these at the very least…

Awwww would ya look at that last pic with his cute smile! Well done Tom. It’s cool Jeremy has his own blog. Says a lot about the guy. Will Tom be the first blogger caught up in a tabloid controversy though?

Yay! you did Sky News!
Weirdly, I haven’t got any video of any of the times I was on (Doesn’t really happen anymore. I think they go for young and glamorous instead of a slightly tired looking working Mum these days ;). I do have though, a video of Nora, reacting to me being on the TV, when she was about 4 months old. Very funny.
It is freakily scary isn’t it. I think there’s a cut off thing in your brain that “just works” that prevents you from swearing.

Hi Tom,
It was a good idea to quit the goatee thing :).
I haven’t seen it, but I’m really curious. Any copy available online?
Cheers,
rjm

Ah, I can’t believe I missed it. The photos look fab. Did really no one rip this?

I flew Premium Economy the other day! Can you even imagine!
If you can imagine that your CEO earns $235,000,000 per year and commutes often daily by private jet to his home in LA… then I can just about imagine that 😉

In my limited experience of TV (BBC Breakfast, Business, 6 O’Clock News) the whole process of bringing in outside commentators is wholly un-designed. About the only bit of the process that seems to be well considered is getting said commentator to the studio on time. After that it appears to be assumed that you understand how TV productions works, how you should sit and where you should look, what the producer and interviewer want from you, how long the process will take, and how your contribution will be edited and contextualised. As for expectation management, it is simply not considered. No follow-up ‘thank you’ (let alone offer of payment), help getting a clip of your interview, explanations about why so little of it was used, or on-going engagement (all aspects of the follow-up I do with speakers I have invited to participate in events). It would be fascinating to see what the BBC’s designers would come up with if this process were up for re-design.