I’m so out of practice in writing this thing that I hardly know where to start. The distractions of a new job and conference deadlines and life-organising rubbish have left my weblog lonely and forlorn. And – as usual – the longer you leave these things, the harder they become. Over the last few years I’ve really noticed that my ability to write comes and goes in cycles. Normally the way you break the low cycles is to talk about any old crap. You just get it out there and then the flow comes back. Which makes me think that maybe it’s a weird form of performance anxiety.

So I’ve decided to break this particular cycle of crapulence by talking about my latest London food discovery – Koba on Rathbone Street just north of Oxford Street. I went there a few weeks ago with Jones and Webb and assorted other fun hipster nerds, and liked it so much that I dragged Simon along the other night after work. I’ve only been to one Korean barbeque place before in London, and frankly it kind of sucked. But this one had all the thrill of having food cooked at your table, with some really extraordinary tastes and weird new sensations. Bloody lovely it was. Very much recommended. 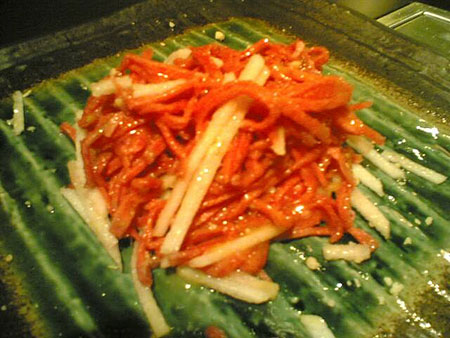 We had a really weird starter this time – a mass of raw beef and raw pear joined up with raw eggs yolk, mixed together at the table. I’m not going to pretend that it was a totally joyful experience, but it was fascinating and I suspect I could get used to it. The meat was chilled to the point of having tiny ice crystals in it, and crunched with almost the same consistency as the tiny slivers of pear. Very strange. In the picture it looks a bit like it’s frying on some kind of warm skillet. But it’s not – it’s just a tasty mash of uncooked beef on a plate. I’m not sure eating totally uncooked beef or raw egg yolks is really enormously good for you, but there you go. 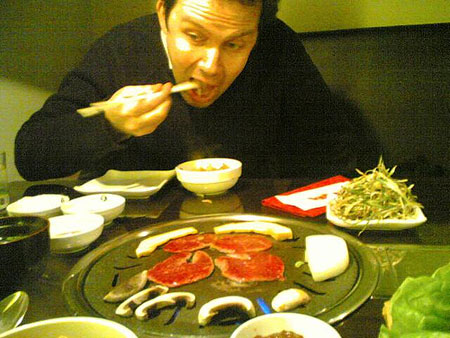 Everything else was enormously well cooked in front of our eyes – with an orgy of little sensory pleasures collapsing all over the place. Each type of meat was cooked slightly differently and deposited on our plates to be wrapped up in leaves with a little hot sauce and a mixture of spring onions. Rounds of bacon sizzled in soy sauce, spicy chicken bits cooked in moments, and tiny thin bits of beef were so delicately cooked that they practically evaporated in your mouth. And then there was the little octopi/octopodes that actually wiggled and twisted as they were cooked. Probably a bit weird for some of you, but it tasted pretty good.

So then a recommendation! Go to Koba. Stuff your face and let them guide you through the whole experience. It’s enormously good fun and – although I’ll probably get some unpleasant bowel disorder as a result – really really tasty. Check out Simon’s Flickr Photoset for more details.

And in the meantime, I’ve broken the block, written some old piece of rubbish to keep my hand in and now I’m going to go off and try and write something more useful instead…

Raw egg-yolk shouldn’t be TOO bad for you… and great for a hangover (apparently – I’ve always been too gutless to confirm).

Thought I knew a lot about Korean food, I also lived there for over a year, but never heard of this dish. You got the Korean name for it? There’s a great blog on Korean food, not being updated anymore, but it’s a classic of its kind:
http://fatman-seoul.blogspot.com/

Have you tried Ran on Great Marlborough Street? It’s my favourite Korean barbeque place in London, but I haven’t been there in a while.
I’ll have to check out Koba.

About a year ago I ventured into a place on D’Arblay Street, off Wardour Street. Can’t remember the name. It was a fantastically refreshing adventure into the unknown, especially for a gastronaut such as myself. Ever since then I have had a love affair with kimchee. There was also something called “bracken”, which was great – presumably some kind of seaweed, but don’t quote me on that. Another tip is that a lot of Korean dishes are available ready-made in the little Japanese supermarket behind Centrepoint (which has a brilliant Japanese restaurant upstairs, by the way).
I left London for the Derbyshire countryside six months ago, and I thought I’d miss the gastronomic scene more than anything other than my friends, but I’m actually discovering amazing locally-sourced organic produce from the farmers round and about – a wholly different but just as intense a pleasure.

Tom- glad to see you enjoying Korean BBQ. I personally think Korean BBQ is better than Japanese BBQ because the Koreans marinate the meat before whereas the Japanese BBQ the meat and then dip it in sauces after it is cooked.
Raw beef and raw egg is eaten in many parts of the world including France (steak tartare), Italy (carne cruda), and many parts of Asia including Japan and Korea.
Swing through Japan for more culinary treats 🙂

Congratulations on finding Korean BBQ in London… which is edible. The best one I’ve had yet was in Okinawa in Ishigaki.
If you want a taste of some authentic Japanese cuisine, check out Asakusa Restaurant by Mornington Crescent tube station. Yum!

The raw almost froze beef is called yukhoe (Ïú°Ìöå). Here is a link with some pictures:
http://blog.naver.com/seasun707?Redirect=Log&logNo=120021353014
-Hussein