Watching the Oscars in the Manchester Grand Hyatt with assorted fun people is a very different experience from trying to stay awake in the UK as it stretches into the wee hours. It’s actually fun for a start. And Jon Stewart is really funny. So far we’ve had a couple of neat skits, a full on Clooney charismathon (plus Supporting Actor win) and Kong‘s got Best Special Effects. Wallace & Gromit have got best Animated Feature, which doesn’t suck too much. I was a bit disappointed about Jake not getting Best Supporting Actor – apparently the rumours are that Crash is building up a head of steam and may depose Brokeback, and this could be the first sign of that collapse. But I’ve watched enough episodes of the West Wing to know a bit about expectations management, and I’m trying to work out if the Crash rumours are part of a campaign to remind the Academy that Brokeback is not a done-deal. Get the vote out, if you know what I mean…

A little bit later and we’ve had a couple of shorts, a few really creepy adverts, a great Scientology line from Stewart that won’t win him any favours in his later career and ooh… ooh… Jennifer Aniston. Wow. She looked really grouchy. Almost as grouchy as she looked in the pre-Oscar show when you could tell that in the back of her mind she was reciting to herself, “never gonna get an Oscar, never gonna get an Oscar”.

Hm. Rachel Weisz won Best Supporting Actress for the Constant Gardener which is a bit of a funny thing to happen. I mean I watched the film and she was okay in it, but there were a great many times when I couldn’t decide whether the character was just really objectionable or whether it was the actress. Seeing her on stage makes me think it’s more likely that I just don’t like her very much. On the basis of the clip alone, I think I’d have gone for Amy Adams. In other news, what the fuck is up with Narnia?! It was a bloody terrible movie and the effects were a complete rip-off of Lord of the Rings – visually there was no creativity there whatsoever. What is wrong with people that it wins anything!? More troubling even than Narnia was Lauren Bacall, who looked far from well when she came on-stage, and then proceeded to stumble over most of her introduction to her section on Film Noir.

First notable comedy moment – the awesome Best Actress campaign skits, as voiced by Rob Cordry from the Daily Show including those that declared Judy Dench to be a bad Dame and Reese Witherspoon to have a good proper American name. Second notable comedy moment – the unintentional WTF interpretive dance thing with the burned out car and the mist and the racial tensions represented by people moving. really. slowly that accompanied the best song nomination from Crash. Jon Stewart on the latter, “My suggestion if you’re trying to escape from a burning car… Don’t move in slow motion…” 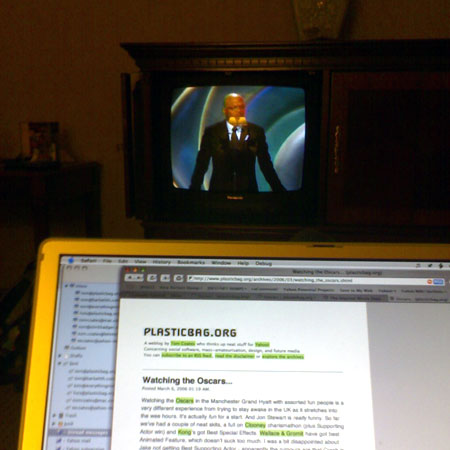 Only an hour and a bit to go and… well… wow, this is long. Every year you forget. So some guys have won sound design for King Kong, Jennifer Garner nearly fell over, there was some stuff that happened. The best song went to a song about a pimp which was interesting. Lots of people died. They used that terrible font from Keynote for the ‘In Memoriam’ slide. Jon Stewart is uniformly a good host so far, mainly because he’s been quite understated. Some highlights – Robert Altman’s honorary Oscar and tremendous speech and Lily Tomlin and Meryl Streep’s performative introduction. We’re nearly out of snacks but SMS’s are coming in from various other nerds who are gradually arriving at the hotel, so there’s a concern that we might not have enough to eat. Simon’s sitting in the corner of the room by the loo working on his presentation because he thinks that’s the only place he can get a good wifi signal. Even though I’ve got a perfectly good one and I’m sitting on the comfy comfy bed. Silly boy.

Best Actor has gone to Philip Seymour Hoffman, which is not a shock and probably isn’t even a disappointment given how great an actor he is and what an extraordinary performance he gives in Capote, but godammit Heath Ledger did an astonishing job and it was a destroying film and Brokeback has to win something substantial. It’s hard to begrudge Hoffman though, particularly after his wonderful and affecting speech to his mother. And Ledger reacted really well to the whole thing. But I need some Brokeback action. Crash simply doesn’t deserve the recognition it’s got, and Brokeback is … astonishing.

This is a seriously weird ceremony – Reese Witherspoon’s got Best Actress? Wow, that’s a bit random and unexpected. Most embarrassing moment – her speech, “I’m just trying to matter”?! References to every major relative on the matrilineal line since Eve?! I rather think that one’s going to stick in her memory for the wrong reasons. Twenty pence on that being significantly mocked across the media over the next twenty-four hours…

Crap! We’re up to Best Adapted Screenplay and yes! Brokeback Mountain has won something decent at last! Yes! About bloody time and it’s a bloody great one! I’m pretty delighted about that one, although can I just say at this point that Simon and Yoz are being really annoying and talking to each other too loudly about Django and I might have to kill em! Ack! Now Crash has won Best Original Screenplay. It’s all going to come to the wire on this one. Fingers crossed. Crash sucks!

13 replies on “Watching the Oscars…”

And the award for best use of a cuss word in a blog post goes to… David Jaffe.

Hi Tom,
We’re a few miles north-west of you, enjoying South Mission beach before the conference, and we were rooting for Crash. Brokeback is a good film, but Crash was really layered and addressed issues of race in a very clever way.
Just a shame two good films were up against each other.
Never mind…

The elevator pitch for Crash was probably ‘Short Cuts, but about racism’. I thought it was well pulled off, but I also felt manipulated as the credits rolled. It’s a shallow film that gives a good illusion of depth. It grew away from me, rather than growing on me. And the WTF interpretative dance number actually keyed into what I didn’t like about its approach: it was an interpretative dance number of a film.
Also, being based in LA, it always had an advantage. Especially if you believe the Hollywood gossip which suggested many Academy members didn’t even see Brokeback Mountain.

I think Crash is a great film and very worthy of the win.

“Crash simply doesn’t deserve the recognition it’s got, and Brokeback is … astonishing.”
One man’s meat is another’s poison. Personally the only original part of Brokeback was the gay cowboy element. Yes it was a fantastic love story, yes it was visually stunning but to me wasn’t dramatically different to other love stories. Maybe that is why it didn’t win? Actually, the other good bit was the anticipation; it was more on the edge of your seat than Crash.
Crash however was pretty damn good. I saw it on a flight to the States and still thought it was amazing; the mark of a good film in my eyes.

The elevator pitch for Crash was probably ‘Short Cuts, but about racism’
“Racism, Actually”
(Shouldn’t really comment, not having seen Crash or Brokeback (or Love, Actually come to that), but what the hell. (I’ve seen Kong, TLTW&TW and TCOTWR – spot the common denominator. While we’re all disagreeing with Tom, I loved the Narnia film but wasn’t crazy about Kong – far too long and didn’t really resolve the central silliness of the plot. Great narrowly-avoided-shipwreck sequence, though.))

I’m with you on this one, Tom.

tom. i do agree with what you’ve said about the oscars, apart from one thing.

i loved narnia, ok, technically it did take inspiration from lord of the rings, but after being a die-hard fan of the original BBC drama, it was so refreshing seeing such a high-quality remake. for me, it relit a fire that had gone out, i was mesmerised. but hey… personal choice eh? x

Yes depressing as all get out innit???
I did so love the Crash interpretive dance however. I am still a bit appalled over the poor offerings for best song. Dolly Parton? Some schmaltzy thing? And intelligible rap about pimps? really….

I was disappointed Brokeback didn’t win best picture too – Crash was OK, but Brokeback was in a league of its own. I think in today’s climate – race is a more media-friendly subject for those in positions of power to consider, compared to homosexuality.
I was pleased that Reese Witherspoon won though. Ever since Election, she’s been one of my favourites – I watched Walk the Line on the plane last week and even though the sound quality was terrible, I still got a bit teary at the end.

Hi,
I enjoyed your play by play of the Oscars and loved your “Fuck Fuck Fuck” finale. I have watched the Oscars since I was a little boy when my parents let me stay up to see if Star Wars would win Best Picture in 1977, I havent missed a year since, I’ve always loved the magic of the night even if I didnt agree with all their choices but I have to say I almost cried when they announced Crash as Best Picture. Brokeback is an epic, something that really opened doors in our culture, Crash will not be remembered when added to their neverending montages but I bet the Academy will still splice in Heath and Jake in there when they realize they fucked up in a few years. It’s sad that homophobia in Hollywood is probably to blame. Most of Hollywood still likes to keep things like this in the closet because most of them still are in the closet. Even sadder is that next year I may end a long standing tradition that I have had since I was that little boy believing Star Wars had a chance of winning Best Pic. But sometimes new traditions can be rewarding too.
Thanks for letting me rant,
Devlin

My ass is on the floor, because I have laughed it off, damn you.

I seem to be a minority in this office filled with guys but I like Rachel Weisz. I am glad she won.
As for Crash. WTF. It was a good movie, not a great one.