Only colleague (but not for long) Simon Willison and I have been spending a hell of a lot of time over the last three weeks sitting in a tiny room with lots of whiteboards puzzling over motives for collecting and sharing and – frankly – it’s semi doing my nut. Not that it’s not an interesting subject, because it completely is, but because it’s such a big and varied territory. And with only the beautiful OmniGraffle and the amiable Tom Chi to break up the intense thinking (with doodles and … er … more intense thinking), something eventually was bound to snap, and snap it has. So late last week, at something like ten in the evening when we were busy fiddling with some mock-ups or scribbles, at the precise moment that the moon passed overhead and the perfect synchronicity of movements sent a beam of light directly into Simon’s brain, he had a moment of divine revelation, channelled our collective enthusiasm and limited brainpower and came up with this: 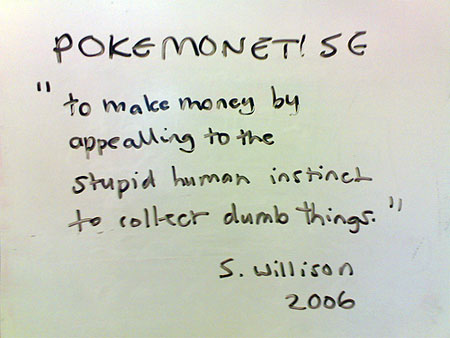 It’s pretty awesome, I’m sure you’ll agree. And while it’s not totally a web neologism because of the Googlewhack of the Americanised Pokemonetize, it’s so much more elegantly extemporised that basically I think ours wins. I say ours because basically I’m in charge of using Simon’s brain at the moment, so really it’s mine by default. Who wants to touch us? I said who wants to … touch us?

I like it. Though I’d argue that the grammar is a bit off and that a Googlwhack requires two words. But I like it!

Love it. Perhaps you could describe the sector as the Pokeonomy?!

And then leading to Pokenomics.
What a great job title that would be – Chief Pokenomicist.

You know the first couple of times I read it as PokeMonet which an equally enlightening parrallel of the collecting mania in toys and impressionism.

Talk about a double entendre, pokemotetise has the word “monetize” in it.
As in take some thing that is difficult to price/market and put a value on it and create a market for it.
Take some junk and monetize it. Cool.

Er. Well that was rather the point.

Wonderful!
I suggest that the industry term for a customer whose life is dominated by this instinct be “Rusty Brown.”
Stefan “I’d buy that for a dollar!” Jones

Jeez, are you still writing this blog? Why don’t you do us all a favour and just sign off once and for all? I, for one, am pretty bored of your irreverent chat and wouldn’t mind seeing some freed-up webspace for other people with more to say for themselves. Time’s up, Coatesy. Move over!
All those in favour, say I…

That’s a ridiculous comment Paul and nerdler – if you don’t like this blog don’t read it.
Tom – while it’s a cool description – what did you come up with about the reasons for that behaviour? I’d like to know – I find that I am amassing a collection of Peanuts fridgemagnets every time I go to a 7-11 – and I don’t even know why! I don’t really like Peanuts that much, I don’t need that many fridgemagnets, but I still find myself getting a little bit excited when I get over the $20 mark (one fridgemagnet per $20 worth or purchases). What’s going on?

You should submit this to http://www.buzzwhack.com.
they really care for this sort of thing.

Cory over at Boing Boing has gone and popularized your beloved word. It appears some guy named Kevin (http://escaping_burger.1up.com/) came up with the word earlier in April. Unless he mopped it from someone else. Can you mop a word?

Love it – ignore the jerks.

What about Pokeblogging:
“to make money (?_?) or fame by appealing to the stupid human instinct to read dumb blogs”
Sounds appropriate here! 😛

great! I hope I’ll find one occasion to use this word!

Brilliant, it has the feel of a mission statement. When can we see you and Simon hitting the management / consultancy circuit pimping this concept and a book published through Pearson/FT a la anything by Seth Godin?