Okay. So here’s a quick theory that cropped up in my head a few years ago and I’ve never really got around to writing it down. It is, frankly, based on some pretty vague memories of some fast-and-loose reading of Laura Mulvey, Jacques Lacan and Sigmund Freud. It is also supposed to not be taken seriously, for those of you with no sense of humour about Psychoanalysis.

Cyclops is a super-hero and a member of the X-Men. His real name is Scott Summers. He’s been in and out of the team since the very beginning, when he was put in charge of the nascent group by the rather intimidating Charles Xavier. His power is to shoot massive red beams of force from his eyes, but this is a power he can’t control – apparently because of a knock to the head he suffered as a child. He wears a visor made of ‘ruby quartz’ that keeps these powers under control. He is obsessed with control, is repressed and constrained and probably has no sense of humour about Psychoanalysis either. Incidentally his father was abducted by aliens and became Corsair of the Starjammers, which is one of those things that could only happen in comics and has absolutely no bearing on the matter of discussion today. Before we get any further – here is a picture of Cyclops: 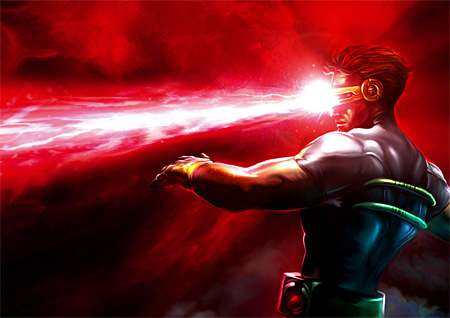 In the latest issues of one or other of the X-Men comic books there’s this whole bit about Emma Frost (telepath, professional sex-therapist and ex-bad-guy) doing some rather clumsy analysis of Scott and coming to the conclusion that his obsession with control and his problems with his abilities are all functionally built around a sense of inadequacy. The issue is entertaining, but not enormously convincing. I think I’ve got a better dumb theory for what the fictional character is about and why he is the way he is. And I’m going to tell it to you. In a minute.

The Death Star is an orbiting space station the size of a small moon. It has huge beams of light that come out of its front which are capable of destroying worlds. Here is a picture of the Death Star: 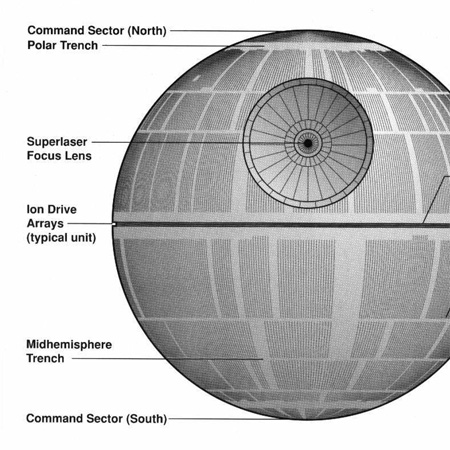 Now, what may or may not be obvious to some of you is that the Death Star resembles an enormous eyeball – a huge destructive eyeball in space – an eyeball with power very much like of Cyclops. Cyclops is – if you will – a humanised Death Star. But why do these images of destructive eyes recur? What’s the common foundation between the Death Star and the Super Hero and what can it tell us about teenagers, people and the act of looking?

Later psychoanalysts spends a fair amount of time talking about looking and the power relationships involved in looking. Laura Mulvey is the most obvious exponent of the idea of the Male Gaze in Film Theory, but it’s also more generally associated with Scopophilia and Voyeurism. Basically it comes down to a fairly simple set of concepts – that the act of looking is an act of power, or at least can be conceived of as such – that it objectifies the thing it looks at. And that’s objectification in its most literal sense – Lacanian Psychoanalysis argued that the Mirror stage at which a child could look at itself in a mirror and understand the relationship between the image and reality was in fact the first time it would have a sense of having a self at all – although having recognising it, this self would always be slightly distant and abstracted. The child created itself as an object in the mirror. It’s quite fun stuff.

Anyway, the act of looking can thus be conceived of as an act of imposing power upon someone, and – if you’re in the mood to – can be thought about as a phallic and penetrative act. It’s an act that has an effect on the thing it’s examining, and potentially a violent and invasive one.

So here’s my theory about Cyclops. His power is a metaphor for the kind of looking that appears in adolescence. It’s the kind of looking associated with sexual desire, and in the furrowing and explorative way that the male (and potentially female – I’m not a woman, I couldn’t say this for sure) eye roams and explores the body. It’s a kind of looking that – while perhaps not a form of violence in itself – could certainly be conceived of as a form of violence from the perspective of a teenage boy trying to deal with a whole range of apparently dirty feelings. Ashamed and uncomfortable with the thoughts racing through his head, and with the way his eyes catch and stick to other people’s bodies, Cyclops cannot deal with this newfound power and freaks out. The visor is an attempt to deal with and control the way he looks at people, and is a symbol of the profound and overwhelming repression of the sexual component of his id. His phallic looking has to be contained and restrained at all odds.

From the perspective of the teenage reader, of course, the character is nothing but a vehicle for exploring hero narratives – but the super-power is also surruptitiously providing a nicely mediated way for the reader to explore issues around their anxieties over emerging sexuality and physical power. Which is why it’s interesting to me that over the years, as the demographic for comic books has flattened and readers have become older, that Cyclops is continually a subject for re-examination and re-exploration. The problem is, for Cyclops to loosen up and become a more adult figure he’d have to sacrifice the wonderfully powerful premise of his character and somehow regain control of his abilities – probably in the most banal way possible, by somehow being able to look at the female figure with his visor off, subsequently leaving him ‘fixed’. But without this premise, he’s just one of a million other super-heroes with dumb powers that no one really cares about.

Anwyay, that’s my theory around Cyclops. I’d be fascinated to hear what you guys think. And not only about him, but about other super-heroes too. Clearly there’s an element of simple hero-fantasy wish-fulfilment going on in all of them. But are any of the other ones exploring teenagey issues in an abstracted, metaphorical way? To arms, both of my readers! Share your thoughts…

17 replies on “On Cyclops and the male gaze…”

I guess there are parallels to be drawn here, with the way Smallville introduced Clark’s heat vision in the episode Heat. Until he was able to bring his power under control, it would be triggered by anything remotely sexual. Of course, this being American television, the control kicked in by the end of the episode…

Of course the danger of too much metaphor, is you’ll end up – like Freud – finding sex, screwed up relationships and body fluids in all human endeavour.
As an alternative, I would go for Jung’s archetypes with superheores in many cases – in that context Cyclops’ power could be considered similar to Midas’ touch for instance, with a similar story/moral attached (depending on the story line).

Eurgh. Jung! This isn’t some hippy weblog! Get off to LiveJournal! 😀

Well, sorry to lower the tone, but “superheroes… exploring teenagey issues in an abstracted, metaphorical way”? I always found Spiderman’s ropes of sticky stuff bursting out at the most awkward moments about as adolescent as it gets – this fan picture puts it particularly well…

Well, it goes without saying that the entire body of X-Men — whose powers manifest at puberty — are a metaphor for coming to terms with puberty itself. And it’s also often been noted that those mutants whose powers are not immediately obvious — such as Jean, Rogue, Gambit, and most recently in the movie versions Iceman — are a metaphor for growing up gay, since you have to “come out” as mutant and deal with your mutant identity.
An interesting test to your theory is that of Rogue: her power is that of touch, rather than sight. When she touches people she damages them in ways that she cannot control. Can you take this as a metaphor for female sexuality? You might, but a lot more interesting — and likely, given the readership of comic books — is that Rogue is a metaphor for the teenage boy’s model of a teenage girl: mysterious, beautiful, and not to be touched, capable of easily wreaking tremendous damage on you despite her frail appearance.
Yeah, so I think this theory holds a certain amount of water.

On a slightly different subject – Whilst I was at university I used to doodle various marvel super heroes on my lecture notes when bored. During one such lecture (Human Computer Interaction and cognitive psychology), the lecturer noticed my sketch of Spiderman, and proceeded to explain to the whole class how people who generally have a interest in superheroes are quite often gay… I never admitted it at the time ‚Äì but he was so right!

I highly recomend an italian author Bruno Bettelheim. He wrote a book about the relation between fairy tales and psychoanalysis. It’s very interesting. I’m sure your theory fits very well with his.

you’ll end up – like Freud – finding sex, screwed up relationships and body fluids in all human endeavour
And your point is?
Seriously, I think you can find wild swashy fleshy emotions in a huge range of human endeavour, either indulged (pulsing away just below the surface) or denied (not influencing me at all no further comment thankyou!) Not all of them are sexual emotions, obviously, but a lot are.

This is an interesting concept! I think this could be correct at least a little bit about Cyclops, but what this entry really made me think about is the way someone looking at you can feel. It’s strange how much power it feels like someone has over you simply by staring!

I had almost the same thought about wonder woman and her invisible plane! In reverse. Or something.

Oh yeah there’s loads of examples of women archetypes as nonentities in a patriarchal society, e.g. Invisible Girl, Shrinking Violet. Then you get the cases where it was (surely) deliberate, like Black Bolt, who never speaks (i.e. as a black man doesn’t have a voice), and if he did speak he would destroy the world (i.e. civil rights upheaval).

I think this is a pretty interesting theory, but I wish that you had included another major aspect of Cyclop’s character in your analysis – he’s a total codependent!

You, sir, are brilliant.

Love this analysis & it works for me. (This kind of post is one of the reasons I have you on my RSS).

If you’re interested in scopophilia and Laura Mulvey’s theories, ‘Bound’ is a very fine lesbian noir that’s well worth a look. All sorts of fetishistic gazes and phallic symbolism, all tied up in a rather satisfying plot.

In classical mythology, of course, the women all have the scary eyeballs. Medusa, the Gorgons etc.
The Cyclops, in whichever case, did not have particular powers in relation to their eye(s).
(I realise this is nothing new to you)
But what changed? And why?

i think i like it as first part thing, as when you begin to say something and then – continue. ok, so the gaze is an important feature in teenagers (and for us 20s, 30s, 40s etc), but what of it: is it good or bad, or maybe the hero is an overgrown caricature of a symptom we as a society have (with the gaze and it’s projection on sexuality etc).
maybe you’d like merleau-ponty and his phenomenology of the perception.
Anyhow, it seems a good start in a direction less psychological and more, well, philosophical. But hey, I’m sorry if this seemed too serious.