I’ve been letting last week’s WWDC settle in my brain and have been thinking through the various features both announced and alleged. I’m not particularly overwhelmed by the whole thing, but there’s enough evolutionary change to keep me comfortable as far as I can see. I’ll be buying it as usual, and no doubt there’ll be some kind of London-based nerd install party, probably around Matt Webb‘s house which I’m already looking forward to.

Weirdly the thing that I found myself most excited about in the keynote however wasn’t Time Machine or the new Mail.app with ‘to do’ integration (drool) or the new multiple desktop managers. It was the new version of iChat. And it’s not because of the ludicrous video backgrounds that I’m sure we’ll all be using even as we sniff at them (useful for people who are cheating on their spouses, I imagine).

No, the reason I got so excited was the ability to screenshare – for me to find someone on my iChat buddy list and basically give them control of my computer: 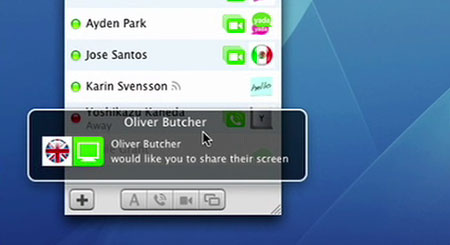 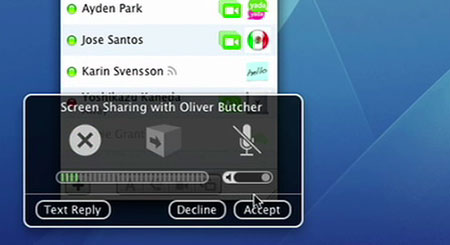 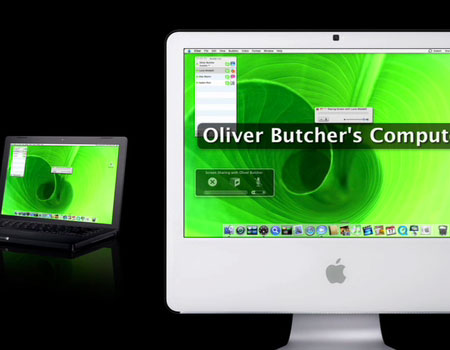 For some reason Steve didn’t talk around this feature during the keynote, but I almost can’t describe how useful this is going to be – and why? I can’t really need to explain! To help my parents with Tech Support! I persuaded them to buy a Mac at the beginning of the year (they got the last of the iBooks, which is almost a shame now the MacBooks are out) and they love it, and they’ve only had a couple of very minor problems, but being able to walk them through things they’ve done wrong, or fix problems that have freaked them out is going to be completely awesome. Another reason why the Mac is moving from being the computer for designers, through being the computer for designers and technologists through to being the computer for pretty much everyone and their families. Lovely job.

5 replies on “Why I'm looking forward to Leopard…”

Um, I’m sure you know this, but it can already be done, albeit with a more complicated initial setup, via VNC. I use VNC/OSX on my mum’s new MacBook and Chicken of the VNC on mine for precisely this purpose. It saved a lot of time until she decided it was helpful for me just to watch her surf through clothes catalogues on the web.

You should check out VNC. They have mac version.

If the Gnome/KDE guys could stop arguing we could have had this in the Linux world a long time ago. Still, it probably wouldnt have looked as pretty.

Yeah, obviously it’s possible on other OS’s but that’s not the point – it’s the integration, the connection with iChat and the fact it’s all preinstalled and easy to use which will make my life easier and that of my mother as well.

Yep, integration with the OS’s pre-installed IM client is the key thing and a great idea, as it was back in 2001 when Windows XP did it.
(Sorry, I know, but I’m still grinding my teeth at the way that keynote started with digs at MS ripping off Apple ideas, then went on to demonstrate a bunch of things that MS had done first)