My politics are pretty well known to people who read this site, I suspect – I’m basically economically centrist, believing in the the necessary efficiencies of a free market curbed from excesses and derailment by regulation at the extremes. I hold a simultaneous belief that vulnerable individuals should be protected from the occasionally inhuman logic of this system through social security and healthcare. I would also argue that this latter support actually helps the functioning of the larger economy by reducing the causes of crime, and maintaining a healthy and educated workforce.

Alongside my economic centrism, I’m basically socially libertarian – quite possibly as a result of being gay and necessarily slightly on the fringes of mainstream acceptability, particularly in some of the more religious parts of the world. I’m a confirmed atheist of long-standing, a rationalist humanist that sees religion as a blot of superstition upon the world, something that confuses and muddies and disguises truths much more than it reveals them. And having spent time working and thinking about ancient cultures and from there moving into the technology industries, I’ve probably gradually moved towards a technologically determinist position on the world – that while changes in technology and changes in politics and belief influence and effect one another, changes in technology are leading that particular dance. If you’re really interested, you can see my positioning on the political compass (and if you want to generate your own, you can do so here).

I say all this to contextualise what I’m to say next – that there is, however, one thing I’ve never really had that much strength of feeling about and that is green politics. It’s probably a clich√©, but at some level I suppose I’ve never really been significantly convinced that the impact that humankind had on the planet was as dramatic as had been claimed. In addition, I’d never really been convinced that any individual could make any kind of realistic difference to the changes that were happening.

It seemed to me that significant change was only likely to happen at the level of hundreds of years and that many of the environmental movement’s particular missions were sort of indulgently anthropocentic. I mean, I care that species go extinct every day. It does matter to me. It’s a terrible thing that humankind has done to that part of the world, but people fight tooth and nail to protect the Panda because they think they’re cute and adorable, because they want to be able to fool themselves that somehow if a few tiny leaves of a once-massive tree remain trapped in some kind of evolutionary terrarium that they’ve somehow saved the world. It’s nature as spectacle, nature as theme-park, where the guilt and prurient interest of humankind has to be assuaged by futile token acts. That’s never appealed to me, because it seems self-deceiving. To an extent I still feel this way.

But on the plane over from the UK on Monday I watched An Inconvenient Truth and I have to confess, it actually feels to me like it’s had a significant personal impact and that it’s genuinely changed my opinions on a whole range of things. 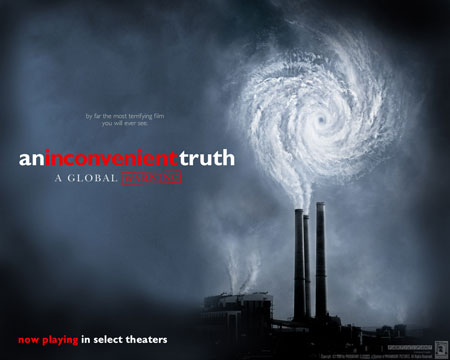 It’s extraordinarily rare for me now to find myself genuinely persuaded by a documentary but Al Gore’s personal walk through the statistics and effects of global warming was convincing, clear and the obvious product of a serious and intelligent man who had read and thought widely on the subject. I found it genuinely interesting, moving and significant – and only slightly polluted by the interweaving of some of the maudlin personal political history of a man who emerges more effectively in action than in narrative and is revealed as a charismatic, intelligent, rational and passionate individual.

I genuinely believe that if you have access to a cinema (I believe it’s just come out in the UK) that you should go and see this film and – if nothing else – let it be a corrective to the other media that we’ve all consumed around this issue. Don’t let it convince you out of hand, but let it stimulate your desire to find out more and to interrogate your own prejudices about the green movement. And in the meantime, as half of America slowly starts to wake up to the realisation that they’ve had the wrong head of state for the last six years, I find myself – like many others in the technology community and beyond – wondering what the world might have looked like now had Al Gore won in the year 2000.

15 replies on “An Inconvenient Truth…”

One way for a non-scientist to evaluate some scientific controversies is to find out the proportion of scientists on each side of the issue. Eg, for biologists: evolution 99.9999%, “intelligent” design 0.0001%. The latest figures I’ve seen on global warming say that somewhere between 97% and 99% of scientists in some aspect of climatology see evidence of global warming. The remaining 1% work for Exxon…. I’m being only very slightly facetious about who they work for. The proportions pro and con are not facetious at all.
When there’s that kind of consensus, you can be sure that one side is right, no matter how many times the media dig up some troglodyte for the sake of a fun, he-said-she-said story line.
I’m a biologist, not a climatologist, but even to me the evidence was startling over twenty years ago, and pretty well nailed down by about ten years ago. It’s a crime what’s been done in terms of hoodwinking the public.
If Al Gore had been President…man, oh man. Isn’t there a phrase somewhere about weeping, and wailing, and gnashing of teeth?

I live in America, and in one of the major cities too (the twin cities) and I greatly wanted to see this film, as an environmentalist myself, and as a citizen, but it only played in one theater. I truly hope that the UK does better in these regards.

An excellent film (and book), a real eye-opener–highly recommended. Walk (if possible) or use mass transit to go see it, you’ll be glad you did. Bonus: if you go with a friend you can head to the pub afterwards for a few pints to discuss the implications and not have to worry about getting behind the wheel of that CO2 belcher to get home.

It’s ironic that the only UK political party anywhere near you on the political compass is the Green party. (FWIW, I’m in much the same place, a bit left of you.)
But I wonder if “libertarian government” isn’t a contradiction, or whether climate change can be controlled without authoritarianism.

Of course, if it is such an important film we should be donwloading it and boradcasting it over local area stations to drown out the rest of TV.
I can’t wait to see it, though I have to work out when I will get the chance, but I still feel we should be encouraged to download, annotate, redistribute comment on and generally make use of the film. and that somehow feels missing.

Now that your opinion has changed on a “wide range of things”, will you be making fewer transatlantic flights?

Honestly, no, I suspect I won’t be making less trans-Atlantic flights, but I am exploring how I can offset the damage I do and become carbon neutral by contributing a proportion of my income towards carbon reclamation and research into new technologies. If I can get rid of as much as I create, then I think I can continue to undertake trans-Atlantic flights without too much guilt or hypocrisy.

That’s great, and I think I’d do exactly the same in your situation.
I worry, though, that carbon offsets bring us the illusion of being able to undo more damage than we can.
George Monbiot’s article Buying Complacency is an interesting read in this respect.

I agree that global warming is real, the science seems clear… what is not clear is that it is caused by human activity. After all, large areas of Iceland were once habitable and Briatin was a major wine producing area in Roman times, which was clearly not a consequence of industrial air polution. I am sorry you were taken in by Al Gore, Tom, but if you ask the right question I becomes clear that it is *far* from clear that mankind is to blame… THAT is a real “Inconvenient Truth” and there are others too.

I may have got this wrong, but are you really telling me that your evidence here is based on stuff coming from Senate Republicans, all of whom presumably have some inclination to protect the policies of their President? And that the evidence they’re citing isn’t a comprehensive review of any kind, but merely a few select academics who happen to agree with their point of view? That seems like shoddy and unlikely evidence indeed. I’m not saying that Gore’s movie is necessarily solid, but if you’re trying to demonstrate its inaccuracy then that’s not a terribly convincing way to do so.

I was just writing a comment, not an essay or an adendum to The Sceptical Enviromentalist by Bjorn Lomborg, and that was one of the first links I came across with raised many of the obvious problems with Al Gore’s film… try google yourself for more.
But whenever you hear claims to the effect that “90% of scientists agree with x” your alarm bells should be going off very loudly. Most agree that global warming is real but a great deal less of them agree that it is man-made, and yet that gets glossed over. Now why is that I wonder? Some even say things like “Oh, sure, it is not guarenteed that it is man made but we should allow vast increases in central planning and economic regulation to minimise carbon output *in the west* just in case”… another rather less scientific agenda you think?
I live in London and do not want my house underwater any more than anyone else, but to just take the word of people who are clearly suggesting things about the scientific consensus that are obviously not true makes little sence to me. I suspect their motives, to put it mildly.

I sit pretty much in exactly the same place as you on the political compass, and in more or less the same place on a similar survey at politicalsurvey2005.com.
I’ve also always had a bit of a blind spot for green issues, mainly because I don’t own a car, rarely travel by plane and pretty much walk everywhere I need to go (so am pretty Green without thinking about it).
However I have heard a number of good things about this film and if it ever makes its way to Jersey, Channel Islands I’ll make an effort to see it.

It’s worth pointing out that your economic views don’t need to be changed to accomodate nature. You simply have to see the value in this “natural captial”.
For more inforation have a look at this site: –
http://www.natcap.org/

I hope all of you can look past your political affiliation and see the actual science presented in “The Inconvenient Truth”. Al Gore may not be a scientist, but he has compiled empirical data from some of the leading scientist today to present a compelling look at the effects of global warming and what the immenant dangers are if we do not take immediate actions. His solutions is doable.