Spotted by Davezilla and displayed in his Flickr photostream, this screenshot purports to be from Fox News’ coverage of the whole Mark Foley scandal in the US. I genuinely have no idea if it’s an accurate representation or a mock-up, although I’m a bit suspicious of it. So I thought I’d ask if anyone out there had any more information.

If it is an accurate representation, then I’m sort of stunned and can only agree with Dinah‘s opinion of the whole thing when she says, “Where’s your moral high ground now, you conservative slimeballs? Monica Lewinsky was 22, yet you tried to bring the whole Clinton adminstration down and now it comes out you’ve been protecting a pedophile for over half a decade?” If it’s not real, of course, that’s no reason to stop being critical of Fox News or the US News Media’s treatment of this debacle. The initial representation of Foley as a Democrat, the way his behaviour has been conflated with being gay – it’s all been a bit troubling even from half a world away.

Addendum posted at 8.30pm: Thanks to Thom Shannon who sent in a link to this image, which seems to conclusively demonstrate that capture above was hacked together in Photoshop: 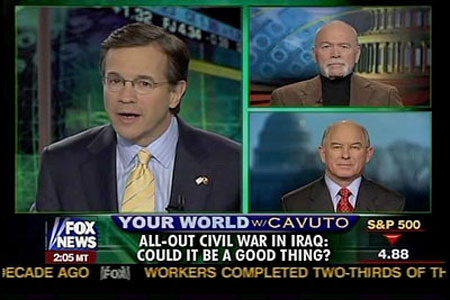 That’s not to say that Dinah’s point still doesn’t stand, of course. The way the Republican party has operated around this territory has been decidedly dubious.

10 replies on “Does anyone know if this is real?”

Going strictly by the use of two fonts in one message (which a google image search for “fox news screen caps” would seem to show is not common practice for Fox) I’d have to say fake. Still “slime-balls” though.

Using font heuristics is the only principled approach to this.

I love how the actual headline is no less ridiculous than the Photoshop job.

Yeah, you of all people should have spotted the dodgy font match.

Jon Stewart did a lovely bit a few weeks ago about the new habit of making captions into questions: “George Bush: The Best President Ever?”. Or, to use an appropriate example: “Plastic Bag: Does Anybody Read It?”.
Hey, I didn’t say nobody reads your blog!

Republican handling has been decidedly dubious
/chuckles to self/
Is that the British tendency to understatement we hear so much about?