Here’s something quite special (for me at least). While I was up in Norfolk over Christmas, my mother showed me a picture that had been taken of our home shortly after it had been completed (circa 1900). It may sound ridiculous, but I find it extraordinary how immediately recognisable it remains despite all the additions and removals and reorganisations that it’s suffered/enjoyed over the last century. Particularly astonishing for me is that the little pine trees that you can see dotted around the lawn are still there today and are now about twice the height of the house itself. And those little trees you can see dotted around the gate and around the drive-way are now enormous mature horse chestnut trees with branches that hang low as you come into the garden and shelter that whole side of the garden in dabbled sunlight through the spring.

I love the idea that the house has gradually settled into its location over the years, that it has made its environment its home just as we made it ours. It doesn’t look like a block perched on a hill surrounded by fields any more. Now it looks like a part of the landscape. And that makes me think more about the nature of artisanship – particularly that the creators of the house and garden built something that wouldn’t even start to look its best until decades after they had died. I wonder whether the current vogue for disposable, short-term buildings means that we’re cheating ourselves of that settled-in, mature feel – as if all our buildings were like unripened flavourless cheeses that we never respected enough to come into their own.

I’d love to work on something that had that kind of presence in time, that wasn’t going to vanish or mutate overnight. I wonder whether that’s why so many web people still want things in print or physical media. Because that way the artefact can age and mellow with them – even after them. That they need that sense that they’ve created something living that will change and deepen through time just as steadily as it will endure. 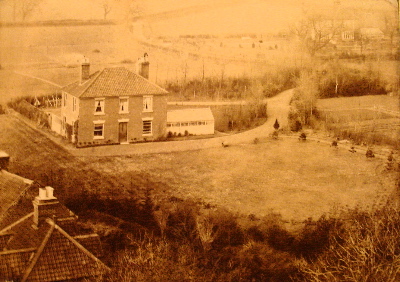 I’m not sure it has enough of the sense of creative labour that I’m looking for, but certainly it’s a good idea and I will definitely consider it.

Would be good to see a picture of how the house looks now.

There’s a tree cathedral in Whipsnade that I saw on TV. These pictures are rubbish actually, on TV they had actually bothered to film when there were leaves n the trees, which made a big difference.
The idea is a little odd, but the presenter was saying, the people that planted the garen would never see it at it’s finest, obviously as it wouldn’t grow into itself until many years after they had died. It’s a similar thing to your house.
Perhaps it ties in with your post ages ago about destroying Victorian buildings in London and building new ‘modern looking’ buildings. Everyones up in arms about how new and horrible these buildings look.
Who knows, maye in years to come, they too will look fantastic? Maybe we just don’t give things a chance to mature. Everything we do has to look perfect immediately.