A long time ago during all the Warchalking palaver, I got interested in the idea of trying to find imagery that might convey they concept of an available wifi network to people. Warchalking obviously had its utility – it was a higher level, cultish concept designed to celebrate some kind of Ur-hacker / Urban-tech-frontiersman aesthetic. But alongside that was clearly a need for something simpler that your average punter might be able to get their head around. And when I say average punter, I do – of course – mean me, since I never actually figured out what all the little figures and abbreviations were supposed to stand for. I’m a clumsy, technologically backward Luddite. Sue me.

Of course now there are lots of little icons and logos and buttons – mostly proprietorial – that advertise the presence of wifi, so there probably isn’t the need any more. But at the time I had in my head some kind of image like the RKO pictures logo, but instead of beaming out lightning or pulses – it would instead be firing off packets into some kind of surrounding network.

Anyway, forever and a day later I find myself trying to convey an image of broadcast radio sets engaging with some kind of networked future in a useful way for a presentation and I return to the same image, and after an extraordinary amount of fiddling and arsing around come up with something fairly mediocre in execution, but interesting to me in terms of imagery… 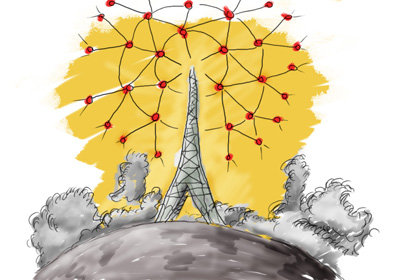 You can download a larger version of the image here: Radio / Network hybridisation. So now I was wondering if anyone had any sense of how maybe to push it forward as an image? Or whether there was someone out there more expert in illustration than I who might be able to turn it into some kind of logo or badge or button. And – of course – I thought maybe it might be a good time to actually see if it makes any sense to people at all.

This is completely throwaway, though. Please don’t think I’m taking this terribly seriously. I just knocked it up while trying to do something else and failing and thought that it might have more value being exposed in public than just sitting on my hard-drive forever.

One reply on “On trying to get an image right…”

The picture still reminds me of France, the top of the tower is where Paris is and the image feels like Belleville Rendezvous in nature.