So I’m going to start this post with a comment that someone just posted on my site, because I think it’s possibly the funniest thing I’ve ever read and I’m too sheepish to start the damn thing in any other way:

Congrats on the Bloggie! I don’t suppose you grew up in York, did you? Cos I used to babysit for a kid called Thomas Coates… and if it was you, you may well remember me, seeing as I was the babysitter who burnt your house down while babysitting for you… for which I am supremely sorry.

Thanks for the comment Clare, but no, I’m afraid to say that you never burned down my family home. I almost feel guilty that I’m the wrong Tom after such a heartfelt apology!

Anyway, so this was all a sneaky way of talking about the Bloggies which were announced today. I was really surprised when plasticbag.org got nominated for anything and I’m even more surprised that I won anything. But to win both Best British Weblog and Lifetime Achievement… Wow… The only real response that I can come up with is that I clearly don’t deserve it, and I’m so sorry that my site’s been of such mediocre quality over the last year. But particular thanks to everyone anyway because it’s completely bloody awesome!

Cred as ever goes to awesome and totally potent co-nominees over both categories who mostly rock way more than I do. I reassure myself that they’re all going to win the greater karmic battle because they’re way more deserving. So first off – all of you should go read more English weblogs and stuff cos they’re great:

And woot to all the lifetimers. God we’re so old…

Oh and to help dissolve the horror of my ever-expanding ego, it’s probably only appropriate that I burst my own bubble by posting this hideous picture that Paul Hammond took of me shortly after I heard the news. Mmm. Classy. 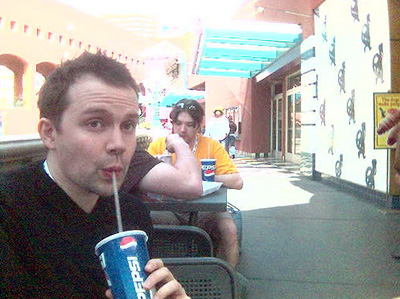 26 replies on “My lifetime achievement? You're looking at it, baby…”

Congrats. Rumour has it you might even have deserved the awards but that can’t be right.. these things are just a big love-in, right? 😉
I’d chuck in londonmark to the list of English weblogs.

Wow, you look so overwelmed. Much like Halle Berry at the Oscars.
Good job, man. Well deserved!

You’re the only one I voted for who actually won anything. I lost my category – yay. See that Pepsi endorsement deal came through. Nice.

If you let me know your address, I’ll pop your Kit Kat in the post.

Don’t feel guilty. It’s me who feels guilty. Now all I need to do is find the other bugger so I can apologise.
Hey, maybe you should do a Dave Gorman and start looking for namesakes? One of Troubled Diva’s commenters knows one, for a start…

That Pepsi cup was a paid product placement, wasn’t it? “After winning my award, I enjoyed a nice refreshing cup of my favourite carbonated beverage: Pepsi!”
You cheap hussy.

congratulations handsome.
cupla tings: there are two trabaca’s in your links list and trash addict dunt work.
if you pass a sbarro gerrus a calzone. ta.

Well done Tom!
The BBC describes the site thusly: “…plasticBag.org, a site dedicated to musings about people and new media” which is OK as far as it goes, but you are SO much more to us all.

That is Horton Plaza, and I claim my five pounds.

Hey Tom –
stumbled in via BBC. Nice site. I like. I may come back (especially now you’re award winning!)
Keep up the good work, continue to look pretty and we’ll all be happy.
Oh, and apologies for the random comment. One lemsip too many me thinks.

Now I live statesiyeed I can punch the air with impunity and yell things like “YEAH!”. Just imagine me doing that for one sec… Well done chap. What happened to the scruff look?

Everybody loves a winner ;D

Congratulations! Been a really engaged reader of your bag for some time now. This is reward for good work done. Hurray! Being on holiday in Austin on Monday … I dropped in on the bloggies (what a shambolic event!! lots of boys mumbling into mics!! whatever happened to physical events and a sense of spectacle??) and I cheered 4 U. Even have a dodgy digi pic of the moment your best Brit gong was announced if you want it.

Finally got around to posting a more detailed description of the Babysitting Arsonist story on my blog, just in case anyone was interested.
Well, it’s slightly more detailed. I got distracted with an entirely unconnected meander down memory lane… but it’s the thought that counts.

Congrats, Tom! It’s actually my first peek at your site, but if you’re winning bloggie’s and all, I may have to return. 🙂