I’m on the train between Los Angeles and San Diego listening to Orbital and overwhelmed by how alien and beautiful the industrial landscape outside my window is. I’m travelling backwards all the way which probably means something. There are lots full of identical vehicles. One lot full of blue tanker trucks. Another full of white articulated lorry fronts. Lined up and perfect. There are buildings with connected trailers and bays numbered one to eight-eight. Train tracks curl around them. Piles of rusting metal sit under repeating arches. Large open machines turn into buildings with little evidence of where one ends and the other begins. Everything’s punctuated by massive pylons and palm trees. There’s graffiti everywhere, and it doesn’t look fake like it does all over London. It looks like it was born here. 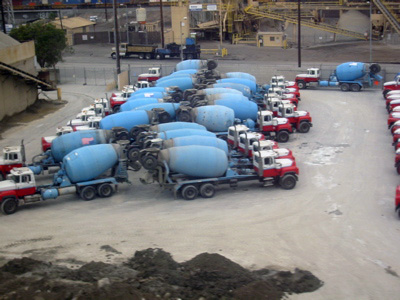 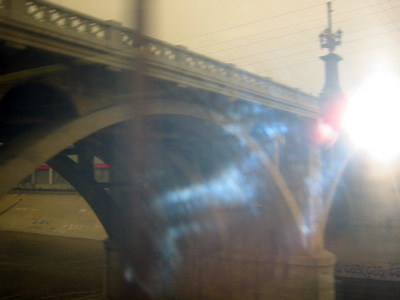 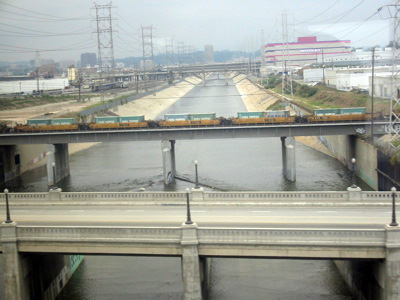 It’s probably my clumsy sleep patterns that make everything here seem hallucinogenically orchestrated. It all seems to be begging for a soundtrack. The whole city feels like Koyaanisqatsi from the train.

My seat on the train has a power socket by it, which I find strange but useful. The man in the onboard cafÈ car apologised for having to stow everything away and made a joke about bean counters. I’ve met a man from two television series and found that a friend’s friend lives off internet poker. Words in roads and signs: peerless, thermo, blister, motor, rivera, pioneer, mason, cord. Everything’s either made of wood, metal, concrete or meat. Colours come in stripes – pink/brown, white, grey, white, pink-brown, green, yellow, dust.

One other thing I’ve noticed here is how strange the quality of light is. It’s about as grey and overcast here as it ever is in London, but there’s still something different about it. More apocalyptic. Possibly it’s because everything is designed to be seen in the bright sunshine – the primal colours of signs and adverts look like they’re clashing with the world. And the buildings – designed to contrast with the blues and whites of the normal sky – blend into it now. It’s like the natural order of the world is upside down. The smog is interesting too – American television often looks blurrier than Englih television. I think traditionally the resolution wasn’t as good. Still there’s something weirdly true about thinking of this place as lacking resolution. I think the smog in the air makes everything look less defined. A clear bright day in London in the spring makes everything seem so real. Here it makes it feel cartoonishly beautiful. Fascinating that light quality could have such an effect. I still remember the peculiar emotional charge that everything had in Helsinki in spring a few years back – the richness of the yellows and oranges – the sense that this light had something added to it that was more fundamental than the shallow shimmers we suffered with in England.

I’m meeting up with Biddulph and Hammond in Oceanside in a couple of hours. More later…

7 replies on “On being in California…”

Beautiful post Tom. I know exactly what you mean about the light in California – it is like a cartoon.

Can I be the first, via these comments, to congratulate you on your Bloggies win.
Well done.

Congrats on the bloggie!
I don’t suppose you grew up in York, did you? Cos I used to babysit for a kid called Thomas Coates… and if it was you, you may well remember me, seeing as I was the babysitter who burnt your house down while babysitting for you… for which I am supremely sorry.

What are all those cement-trucks doing? It looks like they’re spawning or something. (So that’s where little cement trucks come from…)

Have you ever watched Nathan Barley? You probably should to gain some much needed self-awareness.

It’s not just your “clumsy sleep patterns”, I can see the light in those pics, excellent. I’m always surprised at the sense of scale in the States, things go on forever.