I’m still running around like a chicken with its head cut off, so you’re just going to have to bear with me. Well, maybe that’s overstating it a little bit. I suppose I haven’t been running around insanely all the time – I have had a few breaks here and there. I’ve just not really had the energy to engage with the larger issues of the day. Instead I’ve mostly been lowering myself into a warm, milky bath of lame TV where I can destress with a bit of Battlestar Galactica (freaky body horror – awesome), Stargate Atlantis (aka Rodney McKay’s show) and Stargate SG-1 (the Pizza Express of TV sci-fi action). And then of course there’s been the wonderful relief of a three-DVD box-set of the Daily Show’s Indecision 2004 election coverage, which the dear Mr Sweeney sent me from the States.

I don’t think there’s anything I can say about the Daily Show that a thousand people haven’t said before. I became a fan whlie watching clips on the internet – an addiction that was enhanced by staying with Daily Show obsessives in the States. It’s bloody awesome television – smart, satiric and rude – that mostly retains a balanced and healthy scepticism for all kinds of political bullshit from all parts of the spectrum. The DVD box set is particularly awesome – covering the Democratic and Republican Conventions in depth and then a whole bunch of other stuff running up to Election Day itself. I’ve watched every minute of it and every feature and haven’t laughed so consistently in years. That is of course until the denouement, because of course not every story has a happy ending. It’s actually kind of heartbreaking to see Jon Stewart read out the list of states that outlawed any idea of gay marriage – the normal balance of the show rent with a kind of weird desperate horror at the emerging result. I’ll tell you this much for nothing – the DVD would have been a more consistently funny experience if the bad guys didn’t win at the end… Still, there’s always next time. Right? Right? 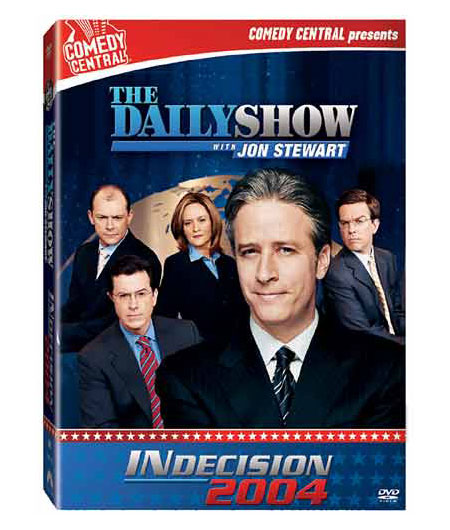 I didn’t mention this, but I haven’t been able to watch the Election Night edition. I TiVo’d it, since I was at a (losing) candidate’s party that night, getting very very drunk at the time. But when it got deleted from the Now Showing list a few months later, it was a kind of relief.

jon stewart for president! especially after his major smackdown on crossfire.

Makes you wonder why we’ve never been able to do a similar show in the UK, really. I guess Bremner, Bird and Fortune is the closest we can get — and all the BBC can manage is The Bigger Picture with Graham sodding Norton…

And good news for us UK residents becuase we’ll be getting the Daily Show later this year. It’s going to be a part of Channel 4’s new station More4.

Hurrah! That is good news, Matt.