I have more folksonomy-related posts coming, I’m afraid, but in the meantime I thought I’d point people in a completely different direction that’s almost nerdier if you can imagine such a thing – towards Grant Morrison and Frank Quitely’s upcoming All-Star Superman comic book series. According to a fascinating interview with Grant the book is an attempt to articulate the classic archetypical concepts of the world’s most famous super-hero in a refreshed modern way. The art fits the concept perfectly – I’m particularly fascinated by this posture-based take on why people don’t recognise Clark as Superman: 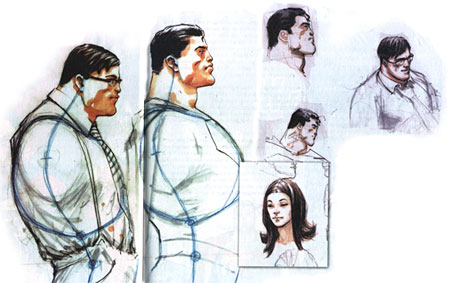 All of which leads me to a bit of a challenge. As part of this process they’ve done the unimaginable and taken another pass at the Superman insignia – which has to be one of the most well-known bits of typographic/branding work of the last century. Which made me wonder – how would a professional typographer or logo-designer push the shielded-“S” into the 21st century? Does anyone have any ideas? Anyone interested in pushing a san-serif modernist Superman? Comic-Sans Superman?

I’m not really the obvious candidate to get people thinking around this stuff, though, so I’m going to link to a few classy typography blogs and see if they’re prepared to pck up the torch and introduce the idea to some professionals – so if you’re interested in typography or design, can I recommend fontlover.com, typographica, daidala.com, Speak Up and Coudal Partners. Obviously, if the rest of you have a stab, feel free to link to your posts below, and maybe I’ll more formally link to the neatest ones or something.

For more on the typographic variations of Superman’s ‘S’ symbol: A dedicated resource.

The ‘S’ on Superman’s costume was never intended to represent the letter ‘S’ for Superman, it was merely the symbol of his family house on Krypton (the ‘El’ house), which Martha Kent discovered emblazoned on items found among the wreckage of the spaceship which brought him to Earth.
The name “Superman” came much later in the character’s life, so a typographical alternative ‘S’ as the basis for a re-design of the logo isn’t the correct starting point.
In Mark Millar’s ‘Superman: Red Son’, Alex Ross redesigned the symbol for Dave Johnson so that it was more appropriate to the communism-themed notion of Kal El landing in a collective farm in the Soviet Union (as opposed to a private farm in Kansas), and the symbol was more representative of a hammer and sickle.
Similarly, Frank Quitely’s JLA:EARTH2 Superman – Ultraman – featured a totally different take on the logo, resembling a ‘U’ which counterpoints as an arrow thrusting upwards.

Actually that version of the origins of the ‘S’ is a much later invention as this site details – and comes from the 1978 film. The comic book before that date was relatively clear that a young Superboy had chosen the symbol to stand for ‘Super’. The site also has a link to a big image showing some of the many logos together: Superman logos.

I remember reading somewhere that the original ‘S’ was also influenced by the football shirt Clark wore at Smallville High….
Suffice to say, it has a confusing history…

One other thing I thought I’d add on here…
Joe Shuster and Jerry Siegel didn’t create Superboy – DC created him whilst they were both in the military. They both sued DC for $100,000 and never worked for the company again.

Wow, this is some really great information about Superman’s Shield. Thanks!

i love the superman show on boomberang and the new movie that is coming this year.

However…When BOB PEAK rendered Curt Swan’s Stylizing of Superman’s \S/ for the 1978 movie poster. He rounded the bottom negative space triangle. and also the points from extreme left to right don’t seem to line up. Right now I am trying to attempt to correct that in my paint program. Wish me luck.
Anyway THAT version of the emblem, although deemed ugly or too thick by some, is the most elegant attempt at the emblem to date.
Bryan Singer’s take on the emblem is…ugly. Bob peak’s renditon (although slightly misproportioned if viewing the wallpaper “Supermanwallpaper9” at patfullerton dot com ) lends itself more typographically to (IMHO) to the lettering of “CBS” in the Walter Cronkite version of CBS News. if you were to look at flatter red/yellow versions of that same rendering in other forms (like Streisand’s \S/ Shirt on her album.)
My hope is to take Bob Peak’s \S/ and do a 3d spinning effect like I see on the more widespread Marketing version of the logo.

here is a redesign of the Superman logo I made
http://img488.imageshack.us/full.php?image=superchest3sn.jpg

I have always liked the Kingdom Come shield…it is simple, but the familiar pentagon gives the identity away. Since I dont know how to paste a pic below…just GOOGLE “superman kingdom come” and you will no doubt see the symbol that the man of steel wore in that story.

Here is a new, edgy, Superman Shield that I created. Check it out. It’s MSAPAINTASTIC. WOW!
http://img315.imageshack.us/my.php?image=supermansheild6xn.png

Hey Tom.
I made a Superman logo.
I felt it was important to simplify the symbol down even more that Quitely had done. The letterform should lose chronological elements, as well as become something simple enough for very young children to draw easily. S’not the greatest thing under the sun, but it’s one shot.

well i think the “s” is the most popular letter in all the world and the tipographic is for the super an the spectacular….
When suprman was created the s is just one letter that they put in his chest but they dony imagine the bigest it could be..

As a kid I didn’t realize that the “S” was an “S”! This symbol has a lot of meaning within the bounds of American culture.To have that “S” is to be super. If someone can reinterpret it for another generation,in a fashion more relative to now, more power to them.

Hey this is a very interesting site..will pass it on to all the superman fanatics in the caribbean. Hey how can i recreate Superman’s logo? I would like to create one. Email me at tee_rex13@yahoo.com with the info please. Thnx

Silly me…from all the Q&A I’ve just been reading, I’m thinking I’m the only one who as always thought that the ‘S’ in Superman’s shield was a also a snake. Its funny what you can see when you are little, through eyes that always put imagination into play. When I was too small to know that the big red symbol in the shield was even a ‘S’ the ‘V’ shaped notched area at the top of the ‘S’ was a yellow snakes ‘eye’ and the rest of the ‘S’ formed the body. Just thought I’d share that bit of trivial info…and…will be wondering if those reading my post will ever see the big red ‘S’ in the same way again?

funny you mention that, Dee. in one of the Smallville episodes from Season 1 or 2, Lex is showing Clark a piece of body armor supposedly worn by Alexander the Great. And guess what was on the chest plate of this armor? A familiar pentagon shield engraved with a two-headed snake forming an S shape…

i wnat to make my own logo of superman. my name starts with ‘B’. i want to put ‘B’ instead of ‘S’ in that logo. how can imake that? pls let me know any siter from where i can do this or any software.plsssssssssss

The S for superman actually has a meaning (in kryptonian) the S symbol means simply hope. and upside down it means rebirth.

I hate this design. It looks like clark is a hunceback

my schools mascot is a turkey. our homecoming theme is the justice league and i really would like to find a design of the superman logo but with a t instead of an s! email me with any pictures..PLEASE!!

I am looking for a Superman logo with a T also for our school mascot. Does anyone know where I can get this from?

i want to replace the s in the superman log with a v .how can i do it.can u plz let me know a site which does it.

Superman’s “S” Shield is the world most reconizable symbol around. I put the “S” on his chest to represent SAVIOR. I mean if you really think about it. His father sends him to Earth to help mankind with his powers. People look to him for guidence and hope. He even said it in the lastest movie to Lois, when he said to her, ” you wrote that the worls\d doesn’t need a savior, but I hear them calling for one everyday”.

hey guys-
great blog; very very thorough on the logo history.
here’s a question for you:
I’m finishing up my new album (I’m an indi singer/songwriter) and would like to maybe use a modified superman logo on the album cover: are we alowwed to do that? do I need permission from someone? would I have to pay something if I create my own image? who should I ask?
I have a tune on the album called “Superman is Dead”
(DON”T WORRY- it’s a song dealing with the modern day polical situation in the US (my nationality), not with our boy himself (who, to me represents what was best in the US values).
If I make the song the title track (it’s going to be one of the singles), playing with the logo is an evident next step. (having it melt, for example…)
PLease let me know your thoughts and suggestions; if any of you are graphic artists, have some fun with this if you feel like it! you can check out a simple demo version of the song on http://www.myspace.com/lawrenceandmrfly
I’d love to get some feed back…
Peace from Bordeaux!!!
Lawrence