It’s reading all this processed text that gets me so backed-up, I’m sure. I need a webloggic irrigation to get the flow back. But at the moment, every scant fragment is a movement in the right direction, so I’m going to start with this little tiny observation. I’ve talked before about mass amateurisation and how larger companies are spotting the creative activity that’s bubbling up from the newly empowered masses. Sometimes, of course, these larger companies don’t always operate as scrupulously as they might. So I was out the other day with Mo Morgan and his lovely lady, and we spotted this in a highly-designed expensive-looking shop called Carbon 28 on Neal Street in London: 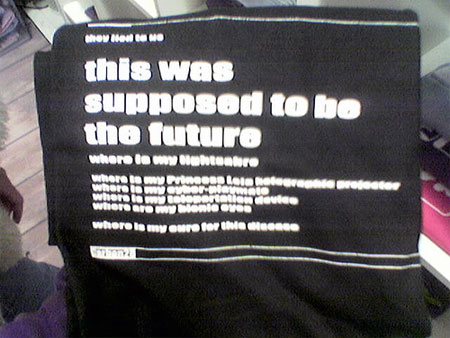 It’s fairly entertaining, I suppose – there’s something about Princess Leia holographic projectors in there and light sabres and bionic eyes. It’s just a shame it’s a reworking of the rather well-known, rather funnier and rather better printed shirt on Threadless. Now I don’t think there’s anything illegal about this – the two shirts are different enough from one another, and you could probably even argue that the Carbon28 t-shirt is a parody of the Threadless one. But it’s… disappointing… you know? Cheap. Clumsy. Inarticulate, inelegant and tawdry. We should be doing better by each other. 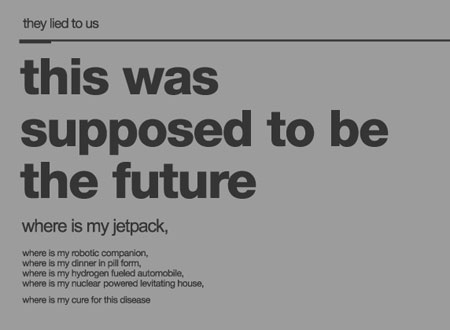 9 replies on “On the clumsy milking of mass amateurisation…”

Plus, of course, it’s a blatant breach of copyright, assuming it hasn’t been licensed.

Expanding a little: to breach copyright, you have to use enough so as essentially the same. In some work, notably poetry, this can be as little as a few lines, if those few lines are the core of the work. In this case, they’ve stolen the format, the first and last lines, and clearly done that.
An expensive copyright lawyer could get Threadless lots of money.

I saw that T-Shirt on Neal Street the other day and assumed it was an inept rip off of the lyrics to Mike Ladd’s “5000 Miles West of the Future”. As you say; cheap, clumsy, inarticulate and inelegant. (though I still think the original T-Shirt is a bit of a rip off of the song, albeit a more elegant one)

Bring Back Retro-Futurism!
I don’t want bionic eyes (unless they’re Zeiss; those cheap Korean knockoffs are full of artefacts) or a jetpack. I want a silver spandex one piece jump suit. And cars with fins, lots of fins. I’ll even settle for a Pan-Am flight to the space station hotel at the L-5 point. Or the transatlantic undersea railway ticket that gets me from New York to Paris in 90 minutes.
Hugo Gernsback had it right.
But mainly I long for the boundless optimism of the sort of Sci-Fi I read in my youth. That comic called “You Will Fly To The Moon” spoke to me in primary colours as a 9 year old. In the 40 years since, reality has proved to be depressingly monochrome.

Oh, that’s so lame. They even added their own logo, and managed to miss the point — that it’s formatted like a prescription drug’s informational sheet.
I note they don’t have it listed on their online catalogue…
lame lame lame.

Can anyone confirm whether perhaps the Threadless shirt wasn’t a copy of the Carbon28 shirt (though I’d be pretty sure it was a Threadless shirt first)?
Anywho, it’s an outrage. And explains why, when I saw this shirt on Threadless I’d think “Yeah, that’s a cool shirt” then I’d see it at the Sunday Upmarket on Hanbury Street and think “This shirt isn’t as cool as I remembered”, forgetting that I saw it on Threadless in the first place, where it is cool.

@Greg:
well, the Threadless tee goes back at least to Nov 6 2002 — I remember it being one of their first really good designs. So it’s been there for a while.
Someone could ask the designer of the Threadless shirt? He’s emailable.

I bought the Threadless shirt text with a Carbon28 logo in 2003 in Camden. Perhaps they are one and the same people?

Saw a ripoff of that T-shirt down on Spitalfields Market too, no idea why they bother it wasn’t exactly brilliant or funny in the first place.