Right then. Where to start? Um. Right. I left the UK on Saturday for San Francisco and I’m going to be travelling around mostly on work business for the next three to four weeks. So there are lots of new opportunities for some of you to bump into me in person, and I’d very much like it if you’d take up the opportunity. At the moment I’m spending a week with my Tech Dev homies at Yahoo! Mission College, and staying with Cal in the city in the evenings. I’m suffering a bit from jet lag, so I’m regularly up around 5am and have taken the opportunity a few times to watch the sunrise over the Bay Bridge. 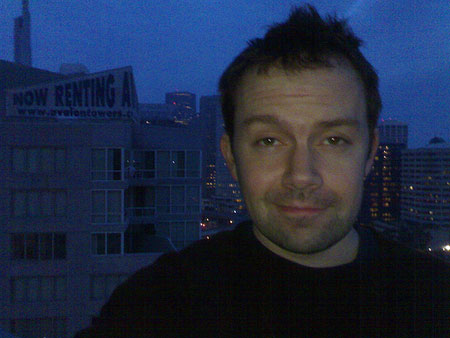 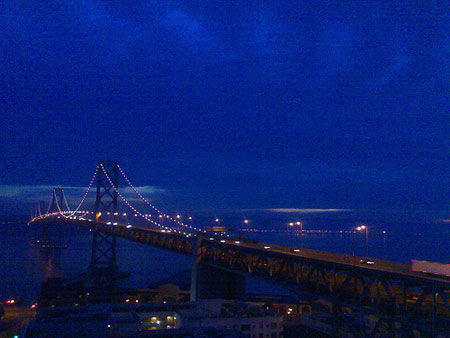 I’m also conking out around 9.45pm on Cal’s sofa, so don’t count on me being the most enthusiastic companion if you’re proposing anything in the evenings. If any of you take the Caltrain down to Silicon Valley in the mornings, then I’m normally lurking around the second carriage from the back with Cal and Heather and Simon.

Anyway, I’m only around in San Francisco until Saturday, at which point I head off to San Diego for ETech. There’s a bunch of cool stuff happening down there this year, including a Yahoo Developers party, which I can recommend people should go to if they’re around. At relatively short notice I’m also going to be doing another pass at the Native to a Web of Data talk that I did at the Carson Workshops thing earlier in the month. I’m hoping to have had an opportunity to expand around some stuff and take another pass at some of the meatier concepts, and I’m really looking forward to getting the reactions of a very different audience. And if that doesn’t float your boat then Simon’s doing a re-introduction to Javascript, Webb and Cerveny are going to be doing something crack-fueled about MUDs and Web 2.0 without the browser and there are about a thousand other nuts things going on as well. Even Biddulph’s coming out of hiding for this one.

From San Diego, I’m heading off to Austin and SXSW on the Friday after ETech. It’ll be the first time I’ve ever been to the event, although I’ve written about how much I’ve wanted to go pretty much every year since 2000. I’m really looking forward to this one, mainly because I won’t be talking for a change. Nice to have a chance to kick back and really absorb what’s going on. Plus there’s the Flickr, Upcoming and del.icio.us party which I’m going to be expecting you’re all going to be attending. Simon’s also going to be on some panel or other. I forget.

From the 15th of March I’m going to be in Los Angeles for some as yet undetermined period of time visiting friends and hanging out with neat tech people. So if you’re around there at all, it woudl be good to hang out. And then – finally – I’m going to be in and around New York for a few days during the week of the 20th of March catching up with people and attending the social event of the season. I’ve even brought my suit across the Atlantic for this one. I haven’t quite figured out any of the logistical details of this last incursion yet – so if anyone has any ideas about places I could stay for a few days that don’t cost the earth, and/or any neat nerds I can hang out with, that would be pretty damn useful and nice.

Finally, the day after I return I’m going to be on a panel at the Guardian Changing Media Summit about social media. I haven’t quite got my head around this one yet, but there are a hell of a lot of pretty smart people planned to be talking over the day, so I’m guessing it’s going to be a pretty solid event.

Anyway, that’s me done. If you’d like to hook up while I’m around the place, then contact me on the usual address – tom {at} the name of this weblog. I’m not promising to respond quickly but I will do my very very best to respond. This is likely to be my last major trip for a good few months, so I’m planning to make the very most of it.

8 replies on “On my significant expeditions…”

Mr. Coates, if you come to Austin on Friday night next and do not come lift a glass with me, I shall be very cross with you. Very cross indeed.

Here’s looking forward to meeting you and catching up with Simon in Austin. Cheers!

You drink coffee? While in SF, go to Philz, 24th @ Folsom. I’ve been going everyday for the past 8 months… I think it’s the best, some agree and some don’t but it’s worth a stop. Tell them it’s your first time. Regards, a reader of your site.

Have a good time in San Diego for eTech. See you in Austin for SXSW. Expect to see you at Brad’s shindig in your suit… ;o)

Hooray, we finally have overlapping events! See you at SXSW.

Hey Tom, see you in Austin!

If you’re still in San Francisco you MUST go down to The Sausage Factory for dinner. The food is really good and I was served by the oldest, campest waiter in the world who made my evening a joy!
It’s at 517 Castro Street @ 18th Street. A restaurant called the Sausage Factory on Castro? Irresistible!