Phew! And I’m back in London and this is basically the first opportunity I’ve had to put my head above water since. I’m ploughing through a backlog of e-mail from stuff I’ve not had much of a chance to deal with over the last month or so, finishing off scraps of work so I can close their respective GTD loops (I never finished the book, too busy) and looking at the wastelands of my nearly finished weblog posts and ever expanding to do list and thinking about how much of it I can hope to get done over the weekend. So much of my life at the moment is about getting back to zero. Other people seem to get much more done across a much wider range of territories without getting so swamped. Or they hide it better. Or they lie.

So what’s happened since I’ve last been online? Er. Good question. My one hour of sleep was followed by several hours in Newark, a seven hour flight getting back to my flat around 10pm on Sunday evening. And then a few scant hours later I was on stage at the Guardian Changing Media Summit in London’s fashionable Victoria. As Ben Hammersley’s utterly charmless portrait of me indicates, I had the jetlag sweats and grumps and could only concentrate due to the significant amount of adrenalin in my system. Here’s a more flattering Mirror Project-alike photo that I took later in the day in the excitingly lit lifts: 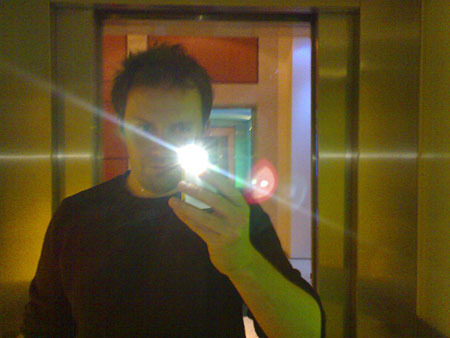 I’m generally having a bit of trouble getting my head around what happened at the Guardian Sumit, but I get the impression that it was a strange event – it felt a lot like the people who had prophesized the dot-com crash last time around (and were secretly delighted that their more traditional media had won through against this weird interloper) had been brought to the event a little against their will – having finally realised that a boom and a bust doesn’t conceal the more general, solid and underlying push in the same direction. The day seem strangely retro and a little bit grudging – or maybe that was just the audience. As I say, I have a pretty bad sense of what actually happened, so I could have got the whole thing completely wrong.

One thing I said during the Social Media panel that seems to have confused a few people was that I mostly have no idea what on earth people are talking about when they use the term social media. This may seem like a terrible confession (and I think some have decided to take it in that way), but I think they’ve slightly missed the point a bit. I’ll write more about that later, but my main issue was simply that the term seems to be being used as a badge for pretty much anything that someone wants to talk about and make sound contemporary. Online community as a term has disappeared, social software seems out of vogue (is media the natural progression) and social networks are quite 2004, but social media as a term is everywhere. And depending on who is using it, it seems to mean everything from mainstream media owners adding new ways of engaging with their consumers, through to standards like community and social networks, all the way through to You Tube, Flickr and weblogs. It felt like there was a pretty weird diversity of opinion on the panel as well. Very confusing.

I don’t think I’ve seen a term so indiscriminately used – I think it’s even more bastardised than social software was at its worst. But I’ll write more about that another time – I have the basic transcript of what I was planning to say at the conference written down somewhere, and I’m sure I can drag the whole thing into some kind of order over the next couple of days.

Otherwise the conference was most notable for me as an excuse to catch up with some of my favoruite people – Hammersley, Neil, Suw, Paula Le Dieu, Sasha, Hugh and a whole slew of old BBC R&Mi types like Sarah Prag, Dan Taylor and Chris Kimber. And I got to see Simon Waldman (unusually grumpy, I thought) and Adam Curry‘s hair – which was totally Smashy (and Nicey). And I had Vietnamese food. And then couldn’t sleep until nearly 3am.

Cut. Cut. That’s enough for now. Too much to do. Roaming off for a bit. I’ll leave you with the most terrifying part of the last few days – working out why my phone had stopped working while I was in New York. Apparently roaming data is even more expensive than I thought it was. That’s five hundred pounds I’m not going to get back in a hurry (mostly spent on a month of trans-Atlantic Flickring). Not good. Very scary. Not doing that again.

3 replies on “Back to London and Changing Media…”

I was out with a chap last night – he runs a magazine, and attended this very event.
Him: Web 2.0 – it’s all bollocks init?
Me: It’s just a name collecting up stuff that’s being going on for ages under one convenient banner.
Him: Exactly. What’s the new bit that I need to know about?
Me: There isn’t one. Except that if you want to get your budget approved for your new project then call it Web 2.0
Him: Stupid name tho.
Me: Well it’s kinda caught on, we’re stuck with it now.
Basically, from what I heard, the event probably didn’t do anyone much good.