So a couple of years ago Matt Webb made a little site called Favcol that you could e-mail pictures to. Once you’d done so, it averaged out the colours, and blended it all together with all the other pictures in the system in an attempt to find the web’s favourite colour. It was pretty awesome, actually.

Anyway, it’s back! But this time there’s a twist. In fact there are a couple. First up – Paul Hammond has taken up the mantle from Mr Webb. Secondly he’s rewritten the code and started to push the concept in an entirely new direction. Now all you have to do is tag up your photos on Flickr with ‘favcol’ to have them appear on the site. This is, frankly, pretty neat and pretty easy. Interestingly when looking for an earlier post on favcol, I stumbled upon this old post from the plastic past: On Flickr, Favcol and my experience of weblogging in which I sort of propose something similar, which just goes to show that – LazyWeb be damned – building something well is way way way more important than thinking about shit. 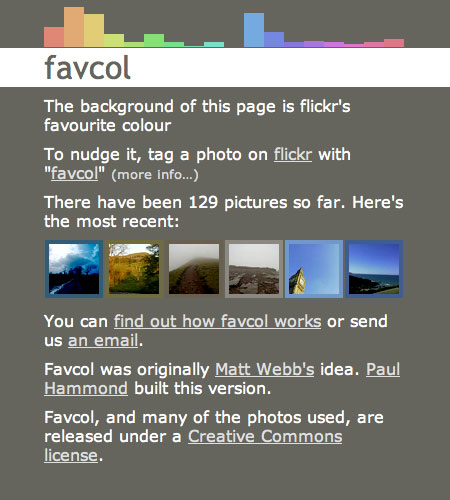 PS. Wow, Lazyweb.org has been trackback spammed to hell and back.

You had to screencap when it was showing a drab grey didn’t you? It was a lovely shade of yellow this morning…