It’s a little late for Easter, but I thought I should briefly mention a shop that a couple of friends of mine have set up in Islington. It sells the most glorious and award-winning chocolate that I’ve ever had the good luck to wrap my slathering mouth around. I’m not normally one for plugging stuff – too protective of the limited good name that I’ve managed to build up over the last ten thousand years of writing this crap – so please believe me when I say that this little shop is quite extraordinary and well worth a visit. No free chocolate was consumed before this post, other than the stuff that was available to all other passing punters. The shop is Paul A Young Fine Chocolates. It’s in Camden Passage in Islington, and features three chocolates that won prizes (one Gold and two Silvers) at the World Chocolate Awards at the 2005 Chocolate Festival. If that doesn’t whet your appetite, I don’t know what will. 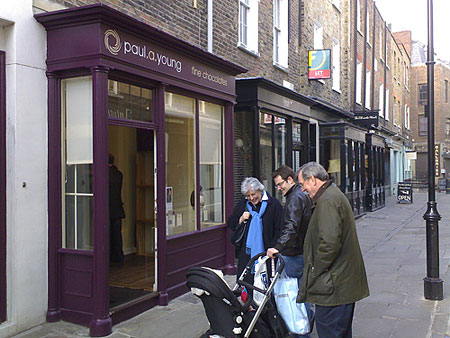 I don’t know how normal this is, but when I visited they were serving little cups of hot chocolate served as the Aztecs used to make it. Here’s some being poured for me by the lovely Paula Le Dieu, who doesn’t work in store, but may be tempted to abandon her successful technology career for a new life as an experimental chocolate-taster. God it was amazing. No milk or cream, but delivering an experience vaguely resembling having the dwarf star equivalent of pure burning chocolate injected directly into your heart. Awesome. 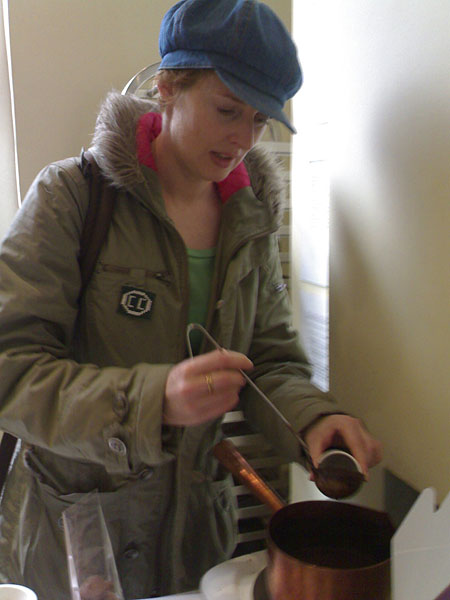 11 replies on “On Paul A Young's very fine chocolate shop…”

There’s a little caravan in Brick Lane market on Sundays that sells the little Azteckian hot chocolate shots for about ¬£2.
Forget coffee – the burning chocolate injected into the heart analogy is perfect – this stuff should be kept away from pregnant women or people with heart conditions.

Well thanks for the tip ! I recently moved to London, and a decent chocolateshop is ofcourse priority number two. Priority number one is a decent Italian Ice cream shop. If you happen to know one, I would love to hear about it !

Ah, I think you’ll be looking for Marine Ices near Chalk Farm tube.

Haha, sounds realllly yummy!
But i have a feeling, some free chocolates were exchanged somewhere for this to sound really good. 🙂
But, when i drop by UK, you can be sure i’ll drop by the choco shop!

Thanks a lot Tom – I will check them out !

I can assert with absolute confidence that no free chocolates were exchanged at all. I did however buy a small box of six chocolates and a packet of chocolate pearls. The disclaimer that you’re looking for is in the first line – that the shop belongs to a couple of friends of mine, so feel free to deduce from that what you want, although it won’t change the fact that the chocolates are bloody amazing.

Oooh chocolate! I didn’t know it was open already, but I shall have to visit and buy a few packets for myself.

I’ve been walking past this shop on the way to work and haven’t yet been tempted in, despite my love for a fine piece of chocolatiery. You may have broken me, Coates.

Sounds great! Can’t wait to try it out when I am in the area.

To whom it may concern
I am moving to London shortly and I am looking
to purchase a fine chocolate shop. Do you
know of such shop for sale. My areas of preference is Mayfair/Sloans Square/ Knightsbridge
I look forward to your reply

I have a strong interest in relocating to London
and would like to open or acquire a chocolate
shop. Your earliest response would be appreciated. Thanking you in advance.
Sincerely
William Lightbody
e-mail btlightbody@gmail.com