I was talking to Kerry Bailey the other day and – on the pretty feeble pretext that “you like maps, right” – he directed me to a fascinating post about Religion in America in which county-by-county maps of the US predeliction for various forms of religious belief have been posted and discussed. It’s such a fascinating piece of work – illuminating clumps of different religious communities around the place (Jews, Muslims, Lutherans, Catholics, Pentecostals etc). My own personal theory – that places with a lot of different religious groups living together tend to be more secular – does not seem to be immediately supported by the evidence. I wonder if there are maps like this for Europe. That would be fascinating. 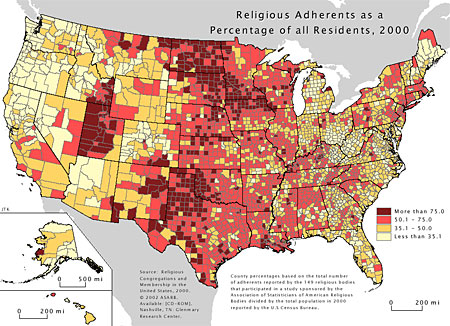 12 replies on “On maps of religious adherents in America…”

My own personal theory – that places with a lot of different religious groups living together..

From my personal experience, those areas of the US with the highest level of religious participation tend to be rather mono-cultural.

If you look at that map the red middle region is known as the bible belt. Those are the Christian Republicans that voted for Bush. I believe if you overlay that map with counties that voted Republican you will see a striking similarity between high Religious Adherents and the Republican party with the exception of Florida – that state just has a lot of old white people living there 😉 – It is even more pronounced in states with Baptists which happens to pretty much draw the North/South divide in the US.
Religion and the electorate in the US is a very interesting thing to study.

Jesse‚Äì
This is probably the best illustration of what you’re talking about.

Nothing that a good bird flu pandemic couldn’t sort out ;-). Seriously if you’re European stick to the edges otherwise it starts getting very strange.

Jesse, I wouldn’t be so hasty with that conclusion, though it is a popular theory. A couple states that immediately pop out at me are South Dakota and Wyoming. You’ll notice eastern South Dakota is, for the most part, more saturated in red than the western part. However, most eastern South Dakota counties vote Democratic whereas the western part is more Republican. Wyoming shows a relatively low amount of adherence but votes overwhelmingly Republican.
Perhaps if you confined your data set to only the most recent Presidential Election you would find the correlation you desire, but including all elections you wouldn’t find such a pattern.

It’s interesting to see the scarlet splodge that is Utah leak into the surrounding states. (Something better illustrated in the other map showing dominant denominations.)
I suspect that population density plays a big role in sustaining or reducing the general influence of religious observance on areas.

Nicole: you need to look at more that just that particular map as there are other economic issues at play as well. You are right, it is relatively a recent thing that the corrolation is so pronounced but so is the out-of-hand extreme left and right politics and constant partisan bickering.
I would bet for another interesting pattern, if you look at those that are affiliated with a religion and look at the percentage of them who vote vs those that aren’t affiliated with a religion you will see those that are affiliated with a religion have a higher voter turnout.
It could be because they are more invovled in the community and are more likely to participate in voting. I know in Canada that is very much the case as is political leanings of non-Catholic/Anglican Christians to the more extreme right leaning party. With the right wing against things like abortion and gay marriage and reformist (barring Anglican) religions the most vocal against such things, this really isn’t a surprising pattern.

Again, I was responding to a specific statement you made.

I believe if you overlay that map with counties that voted Republican you will see a striking similarity between high Religious Adherents and the Republican party with the exception of Florida.

Obviously, there are other things at play. But you specifically noted correlation between high religious adherence and the Republican party. I’m saying that theory doesn’t apply as uniformly as one might expect. It’s just not that simple.

This map confirms the idea that religion thrives most in desolate — I want to say “godforsaken” — wastelands. People living in the barren Texas panhandle or Utah or West Armpit, South Dakota want desperately to believe their lives haven’t taken a wrong turn, that there’s a reason they’re enduring this hellhole.

Why? I wasn’t meaning to troll. (Do trolls list their home pages?) My point seems geographically and psychologically defensible, if not positively obvious given the posted data. The idea probably occurs to most everyone who travels through west Texas and notes the many churches amid the barren flats and trailer parks.

People living in the barren Texas panhandle or Utah or West Armpit, South Dakota want desperately to believe their lives haven’t taken a wrong turn, that there’s a reason they’re enduring this hellhole.

I thought you might be a troll because you unilaterally designated areas you’ve probably never lived in as being “wastelands.” Furthermore, you jumped to conclusions that I would call conjecture at best. It’s been my experience that typically those who denigrate places like Podunk, South Dakota have never actually been (or lived — more importantly) there. Everyone has different criteria they look for in a living location. I wouldn’t call rolling prairie where you can see for miles with no obstruction “godforesaken.” I wouldn’t call the beautifully stark Black Hills rising up from the prairie “godforesaken.” To some people, driving on I-80 in Nebraska for an hour and not seeing a single car is a *good* thing.
My point is that while some people are stuck in what you call “wastelands,” most people actually chose to live there. Thus, your loose association of “wastelands” and people “finding religion” is laughable. Drag out some real stats instead of conjecture, then maybe. Also, given your theory, why does Wyoming have such a relatively low percentage of religious adherents?