I have a kind of superstition when it comes to public speaking, and the superstition is that I don’t write about the fact that I’m going to be doing the speaking on my site until I’m pretty sure I know what I’m going to be talking about. My concern – that I don’t get a bunch of people coming from out there in the world who will watch me make a fool of myself. I am currently breaking that rule. Tomorrow evening I will be talking at the Regent Street Apple Store of all places with a bunch of other weblogging reprobates to help people get their head around weblog culture in a little event that the Londonist crew have organised called Blogging Demystified. Here is the advert: 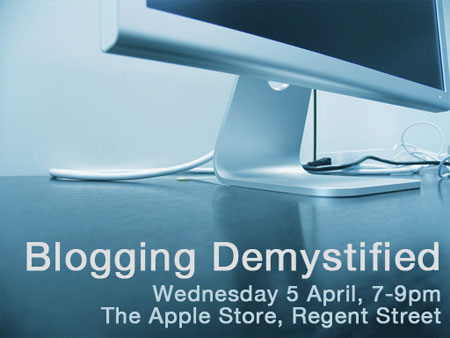 The big problem is that I have absolutely no idea what to talk about. All my colleagues have had a bit more of a run-up to this thing (having not landed back in the country after a month away a little over a week ago) and they’ve gone and claimed all the major fruitful subject areas. Damn you Annie! Damn you Inky Circus Girls! Damn you, Reynolds. Oh, what’s that? You’re all screwed too?

Update: I’m afraid it looks like my body has decided to take this particular decision off the table, by subjecting me to a succession of clenchings, squirtings, belchings and throwings that have made me extremely unpleasant company most of the morning. As a consequence I’m having to bow out of the event tonight, and I’m going to be heading home shortly to get reacquainted with my bathroom. Really sorry to everyone, and should any other event be organised subsequently I’ll entirely be there.

13 replies on “Talking at the Apple Store about weblogs…”

The one opportunity I have to come and see you speak and I’m busy that night!
Damnit!

The title sounds like it’s really aimed at people unfamiliar with blogging in general, so an overview/history seems appropriate. “The Long Tail”, amateurs taking over the professionals, authors and audience communicating directly, some examples of the growing influence of blogging, etc. Maybe work in tagging since it’s kinda your area. You could explain RSS — one thing that non net geeks have a lot of trouble grasping.

I second the RSS idea.
Or perhaps some home-made prophecy – what’s personal web publshing going to be like in 2, 5, 10 years?
I’ll be in the audience, by the way.

Hmph, I’m frantically trying to rearrange things and work out a way that I can justify the time off to pop over and meet you.
I think that a history of how blogging has developed wouldn’t be a bad thing to do. Alternatively, you could tackle certain aspects peculiar to blogging that non-bloggers might not know about, such as tagging, technorati, RSS feeds (I second the call for a good explanation to give to non-techies) etc. Or you could talk about blogging systems and how easy it is to set up a blog. You don’t have to be a computer wizard to set up something like wordpress or sign up to blogger.com.
Right, back to that time management thingy to enable me to come.

Good luck with your talk.
I notice that Apple store employees around here are wearing black t-shirts that say “Bla Bla Bla Blog” – apparently an effort to tout their iWeb software. However, none of them knew that was the name of a real blog that’s been since May 2005! http://rchblog.blogspot.com

Look through your archives, Tom. Think about what you were doing five years ago, and how you got from there to here. And then talk about how people can get from here to five years hence.

Honestly – talk about the scale of it. Because really, you started nearly seven years ago. Kottke.org has existed in various forms for eight.
There was a point in my life when I had to explain what a blog was, and years later that question changed to “why do you do it?”, because people knew the answer (or thought they knew the answer) to the first question.
I think giving a perspective – some history – could be really interesting. Because, you know, some of the discussion, the in-fighting, everything happening to bloggers right now has happened before – and some of it is brand new because the technology didn’t exist, or the mass-market was necessary for some stuff to happen. Also, you could address the breadth (or, if you disagree, lack of it) in those early days, depending on what you feel was the case.
I think people might find that interesting, certainly illuminating, and it provides perspective on some of the truly “new” stuff emerging in the field. An idea, anyhow.

What about talking about how blogging has been adopted by queer kids? People can find much larger queer communities online than they can in their own cities. Blogs are a part of this, because they allow people to read about others like them, thus reducing isolation and the feeling of being an outsider. It might be worth debating whether the benefit of having an emotional outlet is outweighed by the much wider scope for abusive comments from readers.

I second Polly Stark’s line on this. The kind of people who are going to turn up to an events like this are probably not going to be people who know nothing about blogging. People who know nothing about blogging will be down the road in the basement of Topman, or gathering their supplies of overpriced kudos from The Economist Shop.
So I’d try and take a really original route into the debate; it should engage people immediately. Perhaps a few sentences outlining the history of blogging, but history is boring and no-one really cares. I’d try to analyse how I see culture being affected by blogging, or what blogging represents in terms of freedom of expression or globalisation, or how is changing how we rate texts and privilege certain authors over others.
I guess musings on RSS etc would interest some people, but if they could be integrated into broader cultural points then that might bring the rest of the audience in.
Just a few ideas anyway, I’m a bit hungover. Hope it all goes well!

Just talk through your run in with Barry Fry. You said it was like getting counselling from Ronald McDonald which I thought spoke volumes.

If it’s any consolation, we were drunk when we said we’d talk at this thing. Oh, the regret. Not to mention the fact that we’ve only been doing this for like 5 minutes and anything we say will come out sounding dumb.
But seriously your vantage here is unique. You’ve seen blogs change, grow, become recognised and powerful, tempting all the corps and mainstream media to buy in. Does the BBC/NYT having a blog go against the very nature of the medium? Or is it all part of the evolution of the blogosphere (that’s a totally barftastic word, sorry)?
See you tonight.

Stick with a narrow topic – I;d recommend “what is RSS” and “Using Blogines.” They may want to be bloggers but talking about what makes it all work, and then demoing how to set up a bloglines account to watch other blgos lets them fget started without having to set up a blog to get involved