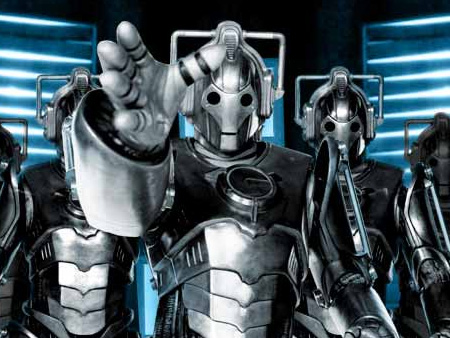 According to Doctor Who, the Cybermen are Humans 2.0 (or more specifically, Human Point Two, which… means… very little). But I protest! I’m not sure Human 2.0 means anything at all! It’s just a stupid buzzword.

Of course it all started with that famous talk from ETech 2004, Is there a robot overlord in your future?. Then there were all those rumours about Dean Kaman showing a new invention to Steve Jobs and Jeff Bezos, and them riding around on it for hours. And then the subsequent stories about Steve Jobs’ skin slipping off at Apple Keynotes and his new mission to “Crush humanity beneath the heal of the Cyber Leader forever“…

And then – of course – Tim O’Reilly had to create a bloody conference. I mean, seriously! Can’t people see this whole thing is just a buzzword!? It’s just a craze! There’s no substance to it at all. All fluff. 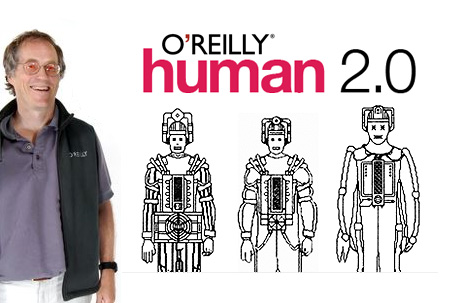 My personal opinion is that it’s just some way of getting some more money invested in the eradication of the human race after the whole World Conquest crash of the late nineties. I mean, sure – we’ve had some hard times recently. Daleks defeated in the far future. The whole Time War and everything. But this kind of shallow attempt to market a slow evolution in science as an end to all human freedoms is just wishful thinking and it has got to stop! I mean, can you believe it?! O’Reilly have even produced a bloody book! 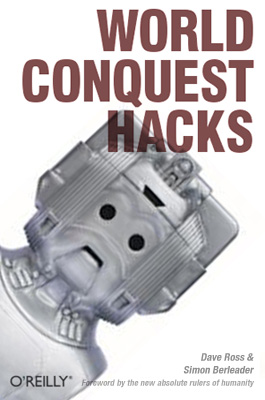 Face it guys, there’s nothing new here that the Slitheen, Autons, Sea Devils or Microsoft haven’t tried a million times before. There’s no substance to it! No great evolution in zombification, no super-guns on the moon eradicating parallel universes. I’m not even sure I’ve seen a stomping moonboot! Hype. Hype. Hype. Hype. Hypey-Hypey Hype-Hype.

It’s for these reasons that I’ve decided to ignore this whole cycle, bury my head in the sand and not pay any attention to all my friends disappearing until such a time that I actually see a Cyber Leader erasing the leaders of this world with some kind of sonic blaster. And then, shortly after I’ve finished celebrating, I will finally be convinced. But not before! This I swear on the databanks of my enslaved robot family until the final years of this tiny crushable human civilisation. So there!

I’d digg this, but I have no idea how I’d climb out of the hole.

I couldn’t agree more, just because it’s the enslavement of humanity, doesn’t mean that conventional business logic can be thrown out of the window.

Well said. Sure, all these post-human emotionless cyborgs might be smugly going around with their metal exo-skeletons and electro-death-grips now, but wait until they’re all out of a job when the bubble bursts in three years time.
All of a sudden, in the cold light of day, they’ll find they don’t actually have any marketable skills in that traditional, non-domination industries care about.

It’s so typical. They’re just plodding along and waiting to be bought out by Google.

I can’t believe so many people are taking in all the hype that Cybu$ are throwing at us. I mean, this upgrade isn’t even open source, ffs. Not only that, but there’s no Jonathan Ives design work, no code names for incremental upgrades involving fluffy cat species — how on Earth are we supposed to take it seriously??!?

You luddites! You’re just too incompatible to see how utterly awesome the Human 2.0 revolution is going to be. Delete you!

I’m afraid this is another typical reaction of the Human 1.0 mindset. You’re simply unable to grasp the paradigm shift that will occur when the vertical market for H2.0 takes off.
Did you even consider the sizable synergies that will make the integration framework for H2.0 interfaces possible? I didn’t think so.

Inferior.
Tom Coates, you are incompatible and will be deleted.

So are we moving towards a Human 2.0 existence? I second that motion. -Mentifex 2.0

Will you be writing and speaking more about Web 2.0 if O’Reilly continues trying to enforce trademark rights for ‘Web 2.0’?

I have no idea what you are winging about but cybermen are cool.
p.s.i’m going to steel the top photo for my blog

Will Microsoft be writing the msHuman 2.0 operating system, if so I`m happy with the Human 1.0 OS
P.S. what an intresting weblog