Aha! Finally I’ve got my hands on some Coca-Cola Blak from Covent Garden’s amazing Cybercandy (along with some rather disturbing minty Malteser wannabes, three sugar mice and some chocolate Band Aids) and I have come to some initial conclusions. It is actually not so bad. It has a slightly weird smooth texture to it that feels more like coffee than Coke, is of course ridiculously sweet and feels a bit more adult than Coca-Cola, but not by much. I can’t imagine it’s going to sweep the world before it, but I don’t regret buying the six cans which I will be placing in my fridge and drinking whenever I need to feel a little tiny bit more classy than normal. 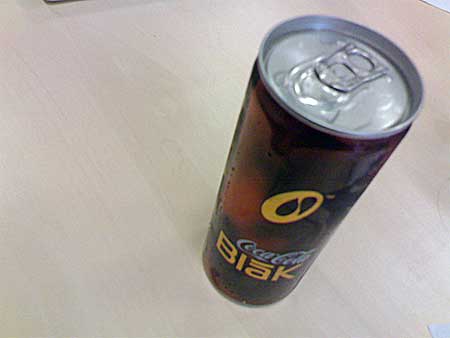 PS. I don’t know if this is going to mean anything to anyone, but it sort of reminds me of Camp Coffee, a weird chicory based syrup that I used to love a few years ago. Only fizzy.

20 replies on “On drinking Coca-Cola Blak…”

I did say more classy than normal. That was rather the point. Than normal. Not classy per se.

The bar over the ‘a’ makes it a long ‘a’. I got some of this stuff recently, but it wasn’t in a can, it was in a glass bottle. I enjoy it, although it’s quite pricey at $1.50 a bottle. Coffee and coke is a good idea. I heard something about Pepsi having attempted this years ago and failing miserably.

i just tried it in paris – both leen and i quite like it. I’ve not seen it sold in san fran yet, but i suspect we’ll be ordering some soon.

That was odd, I had some Coca-Cola Black the other week and the can didn’t look like that. Is there two different types going round and I got the shit kind?

The bar over the ‘a’ makes it a long ‘a’.
Hmmm. To an British ear, the AmEng ‘black’ sounds more like ‘blairk’. (For British English speakers, the first syllable of ‘character’ does not rhyme with ‘care’.) On the other hand, to a British Northerner the Standard English ‘black’ sounds like ‘bleck’, and to a Southerner the Northern English ‘black’ sounds like ‘bluck’. That’s three separate short ‘a’s, each of which has its own long version (roughly, ‘blaaaairk’, ‘bleeark’ and ‘blaaahk’).
Long ‘a’?

We finally got arount to buying some of this today, on our way back from the beach. I thought it was lovely, though Katy certainly didn’t! (but then she doesn’t like coffee anyway).
Your comparison to camp coffee is a good one I think, it’s certainly a close cousin of it, taste wise.

I thought, when I first saw the can, that Coke Blak was geared to the hip hop scene, you know, with the logo’s gratuitous use of a pronunciation symbol and the ebonics spelling. (But it would contain malt liquor and cola, not coffee and cola, in that case, I guess.)

I absolutely love the stuff! My wife bought several 4 packs (at like $4.80), and now, we can’t find it anymore! We originally got it at wal-mart, but they don’t seem to carry it anymore. The grocery store we also bought it from doesn’t seem to carry it anymore either. I sure hope it doesn’t flop out, and go the way of some other defunt coke products! It is a very refreshing taste to me, but I also love coffee. I can see where it may be weird to some non-coffee lovers. Where did you all get it?

Ah Camp coffee – I love that stuff!
Think Mother still has an old jar oozing brown gunk at the back of the cupboard above the stove… you can still buy it, you know‚Ä¶
Is the ONLY thing to make iced coffee with – seriously, the ONLY thing.

Bah Coke is evil all power to Pepsi 😉

I met a couple of guys from Brazil while I was a student back in 1986. Whenever they wanted to stay awake they would mix a cup of Brazilian coffee with a can of Coke and drink it up. It’s amazing to me that it took Coca Cola 20 years to come up with something like this.

I thought it was great. If they break down and sell a diet version in a 2 liter bottle, they will have a new convert (so sue me). It was certainly better than Pepsi Kona from about 10 years ago.

YOU HAVE GOT TO BE JOKING!!!!!! WHO CAME UP WITH THE IDEA THAT STRAIGHT STRONG HARD BLACK COFFEE AND COKE MIXED???? This stuff tanked the first second I tasted it….. The only thing that I have ever tasted that was even remotely worse was that Dr. Pepper RED FUSION crap {I luv dr. pepper, but I couldn’t even drink that}
Sobe GREEN comes in third as all time worst …

i wanna try some, must get my ass down to covent garden! i’m still p*ssed off that they discontinued vanilla coke!!!

I had some of this in Seattle when they were handing it out last year. Euggghhh! Thats all I can say. Sweet, artificial, coffee flavoured rancidness.
Luckily being in Seattle I was quickly able to get rid of the taste with a cup of coffee. And while sitting there drinking my coffee I was able to watch all the other people being handed cans of the stuff. I wish I had my camera to hand when a portly black gentleman walked passed and made the best ‘euuggh’ face as he took his first sip! It was a picture.

To the people saying they like this crap, the only thing I can think of is that you’re either retarded or working for coca-cola. I love coffee and energy drinks, but coke blak is easily one of the worst things I ever tasted in my life. I don’t even know how it ended up on the market.

I went to cybercandy in covent garden and got a can of coca cola blak. I think it is great it is like a non alchoholic version of Tia Maria and coke. I wish they would get it in the pubs here I could enjoy being the designated driver if they did!