Let me be clear – I’ve met Robert Scoble and he’s a decent man, and I think the impact of his weblog on the public perception of Microsoft has been significant, surprising and actually pretty important. But this front-page of the BBC News Technology section is simply ludicrous. It’s absurd. I’m fairly sure that Robert knows it and would be embarrassed by the way it’s being represented, but really the people who ought to be more embarrassed are BBC News, who do a hell of a lot of good in the world, but have really plumbed a new low here: 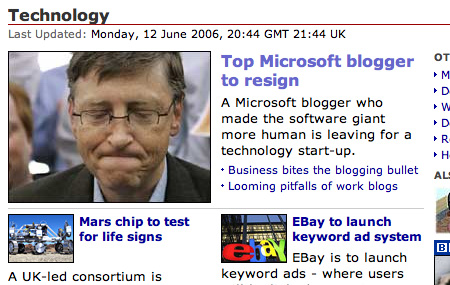 I somehow doubt that Bill Gates is going to be bleeding internally at this news, and suggesting he would completely distorts the story. Readers are supposed to be able to trust their media sources to help them determine what’s really important in the world. Or at least that’s the BBC’s job, surely? Very disappointing.

More generally, good luck to Robert and I hope the new job is as interesting and rewarding as it seems his last one was. Couldn’t happen to a nicer chap.

9 replies on “On Robert Scoble and the BBC…”

It’s what happens when a story breaks on a weekend or holiday in the summer — things get blown way out of proportion because there’s nothing else to occupy the echo chamber.

The first time I saw that I thought it said “to redesign”. True story.

Gah. BBC News Technology? Don’t talk to me about BBC News Technology.
I lost respect for them when they decided to start shilling for video games when they couldn’t think of anything better to write about. As much as I’m addicted to World of Warcraft, for instance, the endless fluffy newsless features about games already played by 6.5 million people just did my head in. I know I’m not the only one.
Articles like the poorly thought out Scoble piece just cement my view that they have no idea what a technology journalist should do. Even the Entertainment section comes across as more professional.

Exactly, how is this technology news?. Pissed me off when I saw it.

There’s so much journo hubris surrounding blogging, no wonder they’re exaggerating stuff like this.

Interesting comments Tom.
FYI the story was the FOURTH most read news piece on the entire website on Monday.

BBC News is superb, BBC News Tech section is dire – practically amateur. I fail to understand how such a disparity can occur. Very strange.

Maybe Bill was thinking, on June 13, how difficult it life would be as a Philanthropist (-:
Gates is such an enigma to me. I really dislike what he stood for, and every photo of him unhappy would make me happy. Also remember that people in Europe may dislike him more than Americans like myself…thus BBC acting like a tabloid.
But today as I think about how much GOOD this man can do, I can’t help but feel dis-pleasure at him portrayed as a man suffering loss.