I have a new toy. It wasn’t enormously cheap and it basically looks like a little box with three lights on it that pulse in interesting ways, but it is extremely exciting and cool. It is a Holux GPSlém 236 GPS blob – recipient of a glowing 99% review over on pocketgpsworld.com. Here is a picture of the extravagant little beauty: 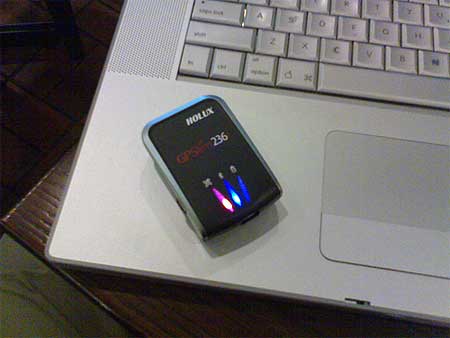 And what does it do? It communicates with satellites to pinpoint your location in the world to within a dozen feet or so and presents it as long and lat coordinates. That’s about it. But the possibilities are sort of endless, and more importantly they’re now available for pretty much any of us to easily hack around and build things with. They’re completely within the range of real humans, pretty reliable and nice and easy to set up.

I got mine working straight out of the box. I literally plugged it into the mains, turned it on and told my phone to pair with it. And it did so with no problems whatsoever. I have Zonetags installed on my phone already for quick photo uploads to Flickr, so I went to its options and told it to start using GPS and pretty much immediately it was detailing where I was in the world, which direction I was moving in and at what speed. Two minutes later I’d taken my first geotagged photo, and ten minutes later when we got back to the office, I could see it plotted on a map. It was all tremendously exciting.

I know I’m sort of late to the game on this stuff, but I’m already thinking around the various things you could do in connecting up GPS things with weblogs and other nerdy extravagances. There’s an enormous culture of people working in this area that could really do with being surfaced and popularised and maybe this little tiny, relatively cheap and easy to set-up little device is the thing that makes that really start to happen? Biddulph’s already shown me a few neat things including a simple app that turns your journeys into .kml files that you can just plug into Google and of course there’s all the neat stuff that Open Street Map have been doing (See Tom Carden and Steve Coast’s Awesome visualisations). But really there’s no limit.

19 replies on “On playing with my Holux GPS unit…”

I just picked up a similar unit online about a month ago.
Apart from ZoneTags, what are the other applications you’re using on your phone?
I’ve found GETrack, which does the kml file thing. I used it to track my trip from home to work on Bus 55.
SmartComGPS is really good and highly detailed, too, but I find it very confusing. It’s neat, though. It will even tell you how many satellites you’re “connected” to.
Are there any others you use?

I’m looking to get a GPS receiver and logger to record my bike ride route and distances. I was wondering whether this has that ability, or whether it was just a ‘at the point’ recording (like the photos)?
You mention the GPS you’ve got tags photos with Zonetags, but does it mean you can get navigation software to work too?
The problem with GPS receivers which work with phones was that they worked over bluetooth, and that sucks your battery no-end. Looks like this one can be plugged in with a cable, which is a bonus.

Tsk. A quick Google-finding-similarly-glowing reviews later, and you managed to convince me to impulse-drop $100 on one myself.
My bank statement doesn’t thank you.
(But I’m rubbing my hands in geek-anticipation of a new toy!)

Goodness, I had no idea these things were so dinky and affordable now. I’m resisting the urge to buy one at the moment, but I doubt that’ll last long…
The idea of logging a journey as a .kml file is especially enticing – is the app in question for OS X?

A buddy of mine just launched a GPS sharing/GMaps mash up thingy, check it out: http://www.treadr.com/

Well, it’s not all bright in the GPSlim heaven. true, it’s small and it has unbelieveable reception. But it often outputs stale readings (you’ll find photos marked miles away from where they were taken). Worse, out of 4 devices we had at the lab, 2 stopped working – the Bluetooth, of all things, fails, drops connections, and sometimes would not even start.
Waiting for the competitors’ new devices before we buy a few more of these…

$100 doesn’t sound all that cheap to me, for not much more you can get a cheap Garmin GPS unit which has a screen and can do all the logging and navigating in just one unit.

What’s tha App that’ll convert the data to a .kml file? It all sounds very exciting.

Yeah Tom, what’s this KML app you’re talking about?
I can feel my geek senses tingling.

@LordRich
I had a look at the Garmin 60 at their Goodwood stand, but didn’t like the UI. Can you recommend a “nicer” model with similar features?
Must let me download tracks (and points) via USB or bluetooth and have a nice menu. That’s it really.

Is it possible to automatically send the .kml to the internet from your phone?

There were a few GPS related exhibits at an exhibition I visited today that may be of interest–
Futuresonic: Off The Map

I also have a holux GPS236. Unfortunately it started to act in a manner that is unacceptable. Sometimes it does not start up the bluetooth and other times when bluetooth does start up it disconnects. Ok so I got one that missed quality control. It happens. What I can’t deal with is not being able to get a response from Holux via e-mail. It appears that they do not have customer support or simply just don’t care about customers. It is a shame. When the unit worked it was really nice. But if there is no customer support the product is worthless! Sorry to be negative but at least I’m being honest. I’ve tried two different addresses twice.
jack

Hi
The holux in question is well known for dropping its bluetooth connection. Expansys has several pages on just this problem. Trying to get info out of Holux Taiwan is like getting blood from a stone. They haven’t even got the page constructed to register the things yet.
Ive been having a long struggle getting the problem even considered.
Stay away from these things, thats my advice. I spent $249 AUD on mine when they were first released. Try Gpstechnologies (Australia) or Holux UK if you want any response at all. gpstechnologies have been great so far.

I feel your pain Jack. I too have had problems w/ Holux. I attempted to install Holux GPSlim 240 on my Panasonic Toughbook and I can’t get windows to recognize the device. Installed drivers, attempted to manually install via .inf file but it isn’t present on cd. Downloaded drivers from website, still no dice. It’s been a few days and still haven’t received a response to my email yet.

We are the Australian Distributors for Holux and have come across this problem with the Bluetooth connectivity just recently. Holux have registered the problem as being a bad batch of bluetooth chips. It is advisable to return the device to the dealer you purchased them from so that they can then do an RA and possibly a swap for one that does work. If you purchased the device from eBay and the likes then you may struggle to get a warranty replacement and may have to send the device back to Taiwan.
Dealing with an eBay seller may have it’s pricing advantages but not the support unless it is a legit dealer of the manufacturer. Sometimes manufacturers may only provide warranty to the original purchaser.

Can a phone with bluetooth be used directly with this unit?

There is one Java-based soft for phones that does GPS navigation, via Bluetooth in particular (http://veripath.us). Works pretty well, cool site, though there is not tracking there yet. They have pretty responsive support, and they said that tracking is on the way. BTW, I tried Holux 236 with Veripath, and my Sony-Ericsson Z525 couldn’t see it. I tried a different BT GPS, and it worked fine (Qstarz). Probably same problem with Holux as mentioned above.

If the Phone is designed to make use of GPS data through Bluetooth then yes.