Simon drew my attention to a site called GIYUS.org the other day and it’s been in my thoughts ever since, and I’ve come to think of it as a really troubling kind of troll-supporting political malware, representing a technologically-empowered massively-distributed form of propoganda that I’ve never seen before. The site’s full name is Give Israel Your United Support and it works like this – individuals download a tool (the Megaphone Desktop Tool) which then alerts people to new articles and polls around the web that question Israel’s policies in the Middle East or ask for public opinion about them. The people concerned are then supposed to visit the site directly and respond to the poll or story or write an e-mail or whatever. They present an example on the page of one of the things that you could be alerted to: 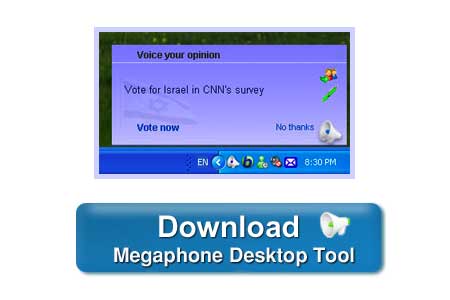 The reason for this activity? Stated at the top of the page, “Today’s conflicts are won by public opinion. Now is the time to be active and voice Israel’s side to the world.” The software is designed to do two things – firstly to make it clear that there’s a large active pro-Israel population in the world, but also it’s there to make sure that the pro-Israel point of view is over-represented in the popular media. These are – let me repeat – the project’s stated goals.

Now I want to make it very clear here very early on that I’m not going to be making an anti-Israeli tract. It’s pretty much irrelevant to me who is using this particular tool – just that the tool exists. Or more specifically – since there’s no way to put the genie back in the bottle – that tools like this exist and will continue to exist from now on as ways to attempt to deform the social discourse – whether that be for Democrats, Republicans, Israelis, Iraqis, Americans, Conservatives. This should be troubling to all of us, although I’m not sure that there’s very much we can do about it.

The short term consequence will be that all large scale public discussions and polls on the internet will become highly suspect – none of these groups are set up to deal with this kind of political spam yet. And that has to heavily affect the ability of organisations that deal with feedback from their audiences to do so fairly or to respond to a real constituency rather than just innumerable interest groups. This is, in effect, a way of harnessing hundreds of thousands of people to massage the public debate – the massively distributed conversation of the internet now has a form of PR – a form of propoganda – to match.

In substance, of course, there is little that has changed here – politicians and religious groups have always wanted to get out their vocal supporters, they’ve always wanted to move public opinion and help people spread the word. And they’ve used all kinds of techniques to do it – right back to the simple letter-writing campaign. And it’s far from the first time that new communicative, democratising technologies have been co-opted or bought ought by organisations who believe that they have to – or simply wish to – take every advantage they possibly can to win, even if it devalues the environment for all in the process. But it’s still something to be pointed towards with anxiety, to be acknowledged as it is recognised – if only so we can mourn the passing of a particular open spirit as the gamers and the trolls colonise the public spaces and set-up shop. We can expect to see this kind of campaigning tool being used in the next US elections I should think, and who knows – perhaps people I know, people like me, will feel they need to use them to see the change they want in the world, or to fight fire with fire.

Of course there is another way this could end. Because a tool that alerts people to points of debate around Israel isn’t only useful to Israelis, any more than a tool that alerts the Green lobby to big issues is of use only to environmental activists. I wouldn’t be surprised at all to see the same tools exposing the same data being co-opted by the direct opponents of the various groups that set them up. Each poll or news article may become nothing more than flashpoint fights between radicals of every persuasion in which the quieter, more average voices get completely drowned out. So there you have it – flashpoints of argument, massively multiplayer campaigning and propoganda techniques, the loss of the common voice and a scouring of the commons. So much for a democratising medium…

10 replies on “On Massively Multiplayer Propaganda…”

Thanks for telling us about this worrying bit of software. You are right that this has let the genie out of the bottle.
Why does humanity have to co-opt everything for selfish, nasty reasons.
Humans – bastards the lot of them.

I used to get much-forwarded mails from relatives exhorting me to rush over to CNN (or similar) and click on a radio button in a tiny box on the side of the page, because clearly this would be enough to swing public opinion our (that is, Jewish/Israeli, always conflated) way.
Thing is, those mails were coming through a (relatively) private trust network. Spending all this effort on moving to an open broadcast system will likely, as you say, be counter-productive.
(BTW, typo in your headline – “propoganda”)

Thanks for pointing out the typo, Yoz. I’ll go and fix immediately.

I’m sure the same software may divert attention to this blog soon 😉
I guess this already happens in various web forums. For example, on globalhousepricecrash.com, whenever there is some debate/program elsewhere, a link is often posted onto the forum. This attracts members to the sites where they participate in the discussions.
Since most of the members of the site are property ‘bears’ they exert a disproportionate ‘bearish’ view on such sites.
This software is I suppose merely allowing people who have shared believes to become ‘net-activists’.

do you think this is much different than large email campaigns similar to moveon.org? i’m not sure.

Leah – the difference is that MoveOn and similar campaigns encourage people to direct their efforts in areas where they’ll have a defined effect, such as official ballots and governmental representatives. GIYUS, on the other hand, is sending its crowds towards much vaguer targets, such as media polls, blogs and discussion boards. In other words: less definite achievement, more noise.

Online polls are wide open to abuse – I think their use should be restricted to non-serious subjects. It is irresponsible to publish poll results for a heated, important topic, especially when there is no information released about the location of the poll respondants (eg poll results could at least be broken down by geographical information gleaned from IP addresses). The fact that they can be so heavily tipped by a private email campaign, this new kind of software, or possibly even a newer form that AUTOMATES the polling by client machines… makes their value highly dubious. At least when a poll is taken by calling a thousand “random” people you don’t get just 1000 noisy protesters.

It’d be worth tracking over a certain defined period the places to which one is directed by the ‘megaphone’. Pick a random hour or two and see where your attention is directed.
My worry is that it encourages more than just clicks on online polls, which are meaningless hit-gathering nonsense. If you look at forums that are probably monitored by this tool — fr’instance, the Graun’s ‘Comment Is Free’ — it appears to encourage the dumping of boilerplate that simply doesn’t engage with a particular topic in anything other than general terms. While email-driven campaigns such as HonestReporting might provide a fairly narrow context in which to respond to a particular point of contention, at least they provided some context.
Plus, as Yoz says, it’s one thing to go after a large media organisation; it’s another to go after a lone blogger in rent-a-mob fashion.

this software could back fire on the people wrote this software, I could download it and go to the sites it directs me to and vote against Israel

Back in the day — the day being sometime around 2001 — in the circles in which I moved any poll on a controversial subject was liable to be “Freeped”. This was when someone on the website freerepublic.com discovered it and posted about it, causing a flood of people to head over and vote their position. The poll was “Freeped” when the results were irreparably skewed towards whichever position the Freepers were in sympathy with.
A modern-day successor to this phenomenon exists around littlegreenfootballs.com, and I’m sure that something similar happens to most articles linked to by Daily Kos.
In other words, while you’re right to lament this, I think it’s a lot less of a new phenomenon than you think it is. The people likely to download the giyus.org alert tool and use it are the same sort of people who were likely to be doing this sort of thing already; it’s just made it fractionally (and I do mean fractionally) more convenient.