So I thought I’d end my series of posts on FOO (which some of you may have determined was originally one grotesquely long post of approaching 5,000 words, roughly chunked to last as long as possible sometime last weekend) by talking about some of the more frivolous things that happened. You need an example? The football-playing robots were pretty extraordinary: 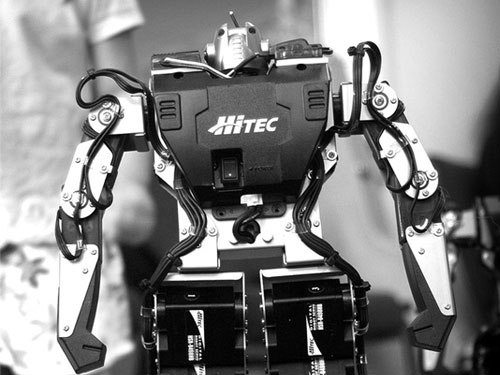 You can see the original by dewitt over on Flickr or – if you’re feeling particularly cheerful and playful, you can watch a tiny bit of crappy phonecam footage of Stewart Butterfield having a play with one of them. There was apparently a large football game between two teams of these monsters. I missed that, but got have a private fiddle which in the end is all that matters.

What else was awesome? There was a great set of films displayed by the Graffiti Research Lab displaying some of their work on Throwies and magnetic / projected graffiti. You can see a whole bunch of videos of their projects on their site – but can I recommend Jesus 2.0, Night Writer and LED Throwies 2.0 if you haven’t seen them already. I think my favourite bit of that particular part of the evening was when Simon started muttering to himself that they were all a bunch of noisy vandals. That particular film also introduced me to new favourite track Bustin’ Loose by Chuck Brown and the Soul Searchers. Which rocks.

Oh and then there was the Applied Mindsish rotating map table of wonder and the laser-etching machine which made a lot of people very happy / nerdy. I only wish that I’d figured out that this was going on earlier in the day when I still had time to get something personal carefully-etched with a space invader. 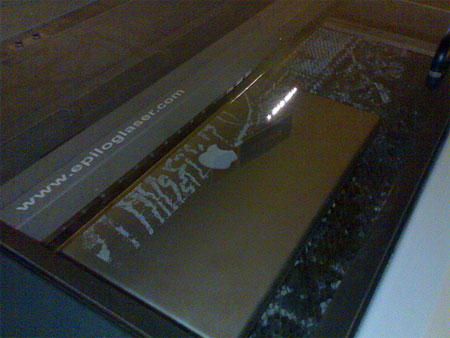 Speaking of space invaders, the most fun out-of-camp project was organised by Chris DiBona and heavily featured space invaders of various kinds. He’d managed to get a plane from Google to fly overhead to take photos to put onto Google Maps and Google Earth. Chris and the lovely Jane McGonigal organised one particular pretty substantial project to take advantage of this opportunity – to build a representation of a crashed Cylon Raider out of bin-liners in the grounds of the O’Reilly offices.

There’s was clearly the most technically proficient of the projects, but I think ours has a chance of being as entertaining. Cal, Simon, Paul, Heathcote, Suw Charman, Biddulph and I – with help from variously lovely people including (again) Jane, decided to assemble two massive space invaders out of large sheets of white cardboard that I’d bought on the way to FOO in the morning for the princely sum of $100. Everything was going really well until about fifteen minutes before the plane flew over when the wind blew everything away (we’d not thought about how to moor the paper down), but we ran around frantically and piled them up with apples and with any luck you’ll be able to see our stunning works of pixel art on your second-favourite maps site sometime in the next month or so. Here are some pictures to whet your appetite: 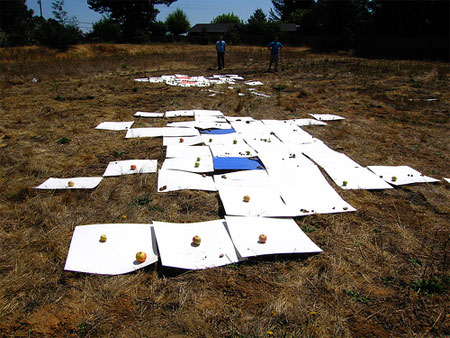 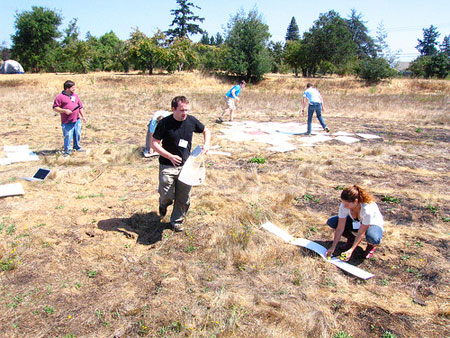 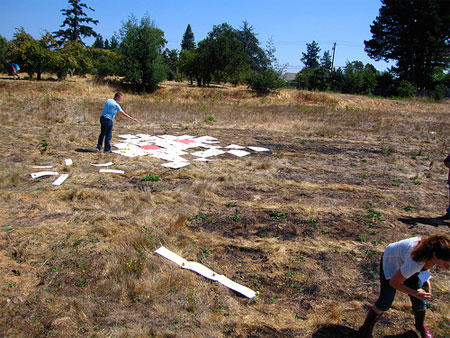 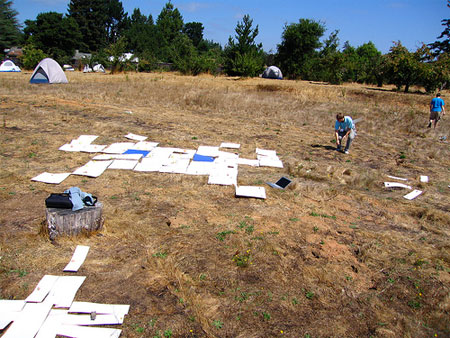 Anyway, that’s my FOO experience all done and dusted. Thanks for being so patient. I hope you’ve enjoyed it as much as I have. As of Monday afternoon I’ll be in San Francisco, more than likely crapping myself with fear about the prospect of speaking in front of a thousand people. I’m around for about a week after the conference as well if you’d like to meet up. Otherwise, speak soon – after all, I haven’t said the slightest thing about Dirty Semantics yet – the talk that I gave at FOO and which I think will be occupying the dark moist spaces in the back of my brain for the next six months or so.

Tom, if Chuck Brown & the Soul Searchers floats your boat — a response to be applauded, incidentally — may I recommend you investigate Trouble Funk (if you haven’t already). Not sure what’s available on CD at this point, but get anything you can from the mid-80s. I saw them play Kentish Town in ’86, and they were BRUTAL. The only gig I can recall, ever, where every single last person in the place was dancing: crowd, band, roadies, bar staff, promoters, bouncers – everyone. Essentially a similar deal to Chuck Brown, taken a few years down the road…